How Much More (Or Less) Would You Make If We Rolled Back Inequality?

What would incomes look like for U.S. families today if the income distribution were the same as it was in 1979?

Larry Summers recently made this really intriguing calculation in the FT.

That got us thinking: What would those numbers look like in greater detail? How would the incomes of the poor, the middle class and the rich look different if you had 1979 levels of inequality in today's economy?

Here's what we found:

Of course, this is a purely theoretical exercise. It combines two different worlds: an economy as big as today's, but with 1979 levels of inequality. Some economists would argue that this could never exist, because economic growth has been been driven by forces, such as globalization and technological change, that have also driven up inequality.

One final note: As you may have noticed, our number for the change for the top 1 percent is a bit different from what Summers found. We calculated this number based on figures from the World Top Incomes Database and the Census Bureau. 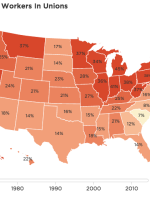