The 2 Goals That Gave The U.S. The Win Over Germany

A 2-0 win over Germany on Tuesday night gave the U.S. a place in the Women's World Cup final.

You can construct a lot of hero narratives around last night's game: The American defense is unstoppable. ( Julie Johnston has been a breakout player.) Midfielder Carli Lloyd owns the field.

Lloyd was at the center of both goals against Germany: scoring the first one through a controversial penalty kick in the 69th minute, and then when she sent in a cross that was knocked home by substitute forward Kelley O'Hara in the 84th minute.

You can watch the first goal here, and the second one here.

As NPR's Chris Hopkins noted Tuesday night: "The U.S. defense has not allowed a goal in five games, since its first game of the tournament against Australia."

But let's save a moment for midfielder Morgan Brian. No, not her bloody, midair collision Tuesday night.

Let's focus on the other 85 minutes of the game. Brian controlled the field. She moved the ball quickly and precisely. Every time it skidded her way, it seemed to drop neatly at her feet. She was everywhere.

Brian is 22, the youngest player on the team. She wasn't assured a place in the starting lineup Tuesday night. And the U.S. has struggled — dangerously — to find the right mix in the midfield. At times during the Cup, the team has looked as though it just met. There was a smart case to be made that coach Jill Ellis should keep Brian in the lineup. (Here's Michael Cummings at Bleacher Report and Kevin McCauley at SB Nation.)

For the U.S. team, this World Cup has been steeped in nostalgia about 1999, the last time the team won. Abby Wambach is clearly a phenomenal leader off the field, but her play has proved that it's time to pass the torch. So let's start thinking about the future of this team. And after last night, Morgan Brian should be central to that narrative.

The U.S. plays the winner of tonight's Japan-England game in Vancouver on Sunday. 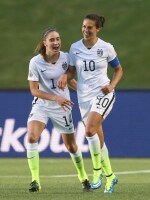 Alison MacAdam
See stories by Alison MacAdam
Krishnadev Calamur
Krishnadev Calamur is NPR's deputy Washington editor. In this role, he helps oversee planning of the Washington desk's news coverage. He also edits NPR's Supreme Court coverage. Previously, Calamur was an editor and staff writer at The Atlantic. This is his second stint at NPR, having previously worked on NPR's website from 2008-15. Calamur received an M.A. in journalism from the University of Missouri.
See stories by Krishnadev Calamur
Latest Stories
Support news that matters in Kansas City
KCUR serves the Kansas City region with breaking news and powerful storytelling.
Your donation helps make non-profit journalism available for everyone.
Donate Now