Another "Mission: Impossible" movie opens today. The franchise has been good to Tom Cruise, raking in more than $2 billion in worldwide box office receipts. So now take five. Here's our critic Kenneth Turan.

KENNETH TURAN, BYLINE: "Mission: Impossible - Rogue Nation" has been polished to a high sheen by people who know how to get entertainment business done. It's a familiar spy-versus-spy diversion where secrets are triple encoded and agents in trouble sound like ambitious dentists when they request immediate extraction.

Tom Cruise returns as Ethan Hunt, key operative on the Impossible Mission Force or IMF. He's hot on the trail of a nefarious organization known as the Syndicate. And he's made a breakthrough.

TOM CRUISE: (As Ethan Hunt) The Syndicate is real, a rogue nation trained to do what we do.

CRUISE: (As Ethan Hunt) They're coming after us with everything they've got.

TURAN: While Agent Hunt is again risking his life to save the free world, a new CIA director is testifying before a secret congressional committee about how the IMF's pattern of want and brinksmanship is so dangerous, the group should be disbanded, which it promptly is.

That leaves Hunt as a man without a country, an international fugitive just when he needs support most. But fear not - Hunt has help not only from his usual IMF gang but also from international woman of mystery, Ilsa Faust. Swedish actress Rebecca Ferguson brings a bit of unexpected maturity and substance to the role of the inscrutable Ilsa, an individual who is fully Hunt's equal and then some. Here Ilsa and Ethan talk about an underwater safe they just have to crack.

REBECCA FERGUSON: (As Ilsa Faust) We have to get through 12 feet of concrete and 70,000 gallons of pressurized water without any metal.

TURAN: Though the "Mission: Impossible" films are known for Cruise doing his own eye-popping stunts, the actor outdoes himself here. Yes, that really is Cruise clinging to the side of a departing aircraft by his fingertips. Cruise has played Ethan Hunt so often it would be understandable if he phoned it in. But what makes "Mission: Impossible - Rogue Nation" fine summer fun is that he goes in the opposite direction and holds on tight. 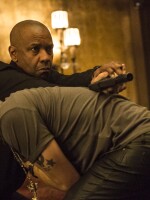