Tilting Toward Fun: A Museum For Pinball Wizards To Come And Play

When most people want to play a game, the first thing they reach for is likely a smartphone or tablet. Actual pinball machines have become quaint curiosities, but a father-son duo in California is keeping these old-school games alive in a museum.

The Museum of Pinball is hidden away in an old industrial building, just off Interstate 10 and about 90 miles east of Los Angeles in Banning, Calif. It's pretty quiet when the rows upon rows of pinball machines are not turned on. But once the switch is flipped, it gets loud.

"I built this collection picking them up one by one, and I put them in my house," says John Weeks, who founded the museum together with his son, Johnathan Weeks. "I'd fill up buildings with them, storage units."

Their collection is huge. There are 650 games ranging from vintage 1950s-era machines all the way up to ones based on current TV shows such as The Walking Dead. John began amassing the games in the early 1980s.

At first, he thought of opening a bar with an arcade, but that would only allow a handful of the collection to be played at any given time. The benefit of the museum is that all the machines are out on display. But Johnathan explains there is a drawback.

"You gotta remember when the museum is so large and there's so many games plugged in," he says. "Just to flip the breakers is thousands of dollars to turn it on for the day."

That means the museum is only open a few times a year. During a recent rare opening, Dolores Barrett was trying her hand at it.

"I've really never played pinball. But I started out by playing The Terminator, and now I'm hooked," she says.

Although she's old enough to have grown up with pinball, Barrett says her parents never let her have a quarter to play as a kid. Now, she's making up for lost time.

On a different aisle of old timey machines, Jamie Vanderet is playing one called Sea Ray. He's here from Ottawa and says he picked up the game at a bar back in Canada.

"Once you start to play, you kind of get the bug," he says.

When he was a kid, pinball and arcades were already starting to fade. He says it's not nostalgia drawing him to the games.

"There's just something about like the lights and colors, especially with the older machines," he says.

Vanderet thinks it has something to do with the physicality of the real machines.

"I have played versions on the iPad and on the computer and stuff, it's not nearly the same thing as playing it in the flesh. I mean, the machines all have their own quirks that you don't really get into when you're playing a digital version," he says. "It doesn't quite match. Not even close."

Quietly tapping a screen is one way to play a game, but as Barrett discovers, shouting and celebrating with each click of the flipper and bounce of the pinball — surrounded by audience — is more fun. 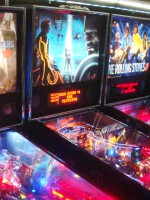 Matt Guilhem
Matt Guilhem is a native of the Inland Empire. After growing up in the region, he went north to Berkeley for university and earned a degree in English. Matt's passion for radio developed late; he hosted a program while abroad in 2011 and knew he had found his calling. Matt started at KVCR as an intern in 2013; he now serves as both a reporter and host for the station. You can hear him regularly most weekday afternoons on All Things Considered, occasionally filling in on Morning Edition, and filing news reports for both programs.
See stories by Matt Guilhem
Latest Stories
Hey, thanks for reading.
KCUR serves the Kansas City region with essential news and information.
Your donation today keeps local journalism strong.
Donate Now