We are following this morning reports of a subway explosion in the Russian city of St. Petersburg. The National Anti-Terrorism Committee in Moscow says at least 9 people are dead and 20 others have been injured in this blast. Reporter Charles Maynes joins us from Moscow. And Charles, what exactly are Russian officials saying as of now?

CHARLES MAYNES, BYLINE: Well, we know that the bombing occurred mid-afternoon in downtown St. Petersburg's Sennaya Ploshchad station. This is right in the center of the city. Initial reports indicated a second explosion in a neighboring station. That now appears to have been smoke carryover from the initial blast. But police say they found another bomb at a third station that failed to detonate.

Thus far, we've had - emergency services, of course, are on hand. There's a mass evacuation of passengers. Also, Russian President Vladimir Putin is actually in St. Petersburg right now. He was there this morning for a pro-Kremlin media forum. He expressed condolences to the family and friends of the dead and assured assistance to the injured. And of course, he's looking and talking to security officials from the FSB about the nature of this blast and what's behind it.

GREENE: Well, after these incidents, I mean, we're so used to seeing, I mean, this grisly footage from bystanders who, you know, were close by. Are you getting a chance to look at some of that?

MAYNES: Yeah. Russia has its sort of own scandalous news sites, like LifeNews. And they're very quick on the scene. They were there first with video and photos from the blast. Also, of course, on social media we're seeing all sorts of things. They essentially showed the doors of the metro wagon twisted outward, the explosion destroying the inside of the car and ripping into passengers. You see images of people lying on the ground dazed and, of course, the - just evacuation of panic passengers. But of course, all this suggests that the explosion was inside the car.

GREENE: And just to orient people, I mean, St. Petersburg, not as big a city as Moscow, but a huge, huge city, one with, I mean, a lot of tourists, a lot of people commuting, a lot of historic buildings - if we're talking about the center of St. Petersburg.

MAYNES: That's right. This is the very center, and it's a very touristy town. A lot of tourists go to St. Petersburg. You know, I think there's - of course, they'll be initially looking at who might be behind this blast. There's sort of several likely suspects I think you'll hear the authorities go to very soon. One is, of course, ongoing problems they have in Northern Caucasus. They've had several wars in Chechnya, the breakaway republic, which has essentially gone much quieter in recent years. But I think there's a suggestion that that's a possibility.

More likely, though, is ISIS, frankly. Russia, of course, went into Syria, where they've been combating ISIS in theory, although many would say that they're also supporting the Syrian leader Bashar al-Assad. And of course, St. Petersburg has been no stranger to tragedy through terrorism. The Metrojet Flight 9268 just in October of 2015 was shot down over Egypt, and that killed 200. And that was actually ISIS's doing.

GREENE: And we should remember, I mean, this is a country - Russia - that has a history of dealing with incredibly painful terrorist attacks. Looking back to the time of the wars with Chechnya, many people wondering if some of that was provoked by Vladimir Putin going to war in Chechnya. But, I mean, a lot of innocent people have been killed in attacks like this in this country. This is not new.

MAYNES: That's right. And Vladimir Putin, of course, with his incursion into Syria, we had ISIS declaring war on Russia and on Vladimir Putin, in particular. So it's an interesting maybe coincidence - maybe not - that Vladimir Putin was in the city today. And I'm sure that's something also that, you know, that the authorities will be looking at, if that's intended to send some kind of signal.

GREENE: OK, but just to be clear to our listeners, even though the National Anti-Terrorism Committee is reporting on the numbers dead, we do not know if this was terrorism yet. No one has claimed responsibility.

MAYNES: We do not know. What police are saying so far, there have been some early reports that it was a homemade explosive device. And as I noted before, they also say that they found a second device which did not detonate.

GREENE: OK. Reporter Charles Maynes in Moscow. Charles, thanks so much. 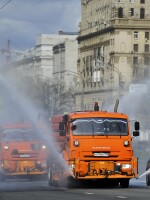