A new federal report harshly criticizes the way the Bureau of Prisons treats inmates with mental illness, singling out treatment at the prison at Lewisburg, Pa.

The report by the Department of Justice's Office of the Inspector General says BOP violates its own policies by keeping prisoners with mental illness in solitary confinement for too long and with too little treatment.

At Lewisburg, the report finds many of the harsh practices that were outlined in an investigation last year by NPR and, , a nonprofit news organization focused on criminal justice.

Prisoners with mental illness at Lewisburg are placed in solitary confinement, usually with another prisoner, who often also has a mental illness.

Lewisburg's cells are tiny, and at 58.5 square feet, substantially smaller than the 80-square-foot minimum recommended for solitary confinement by the American Correctional Association, the report notes. A senior official at the BOP told the auditors that "the ACA standards for restrictive housing cell size are not mandatory."

But that can be dangerous. The NPR/Marshall Project reporting also shows that double-celling two inmates in one small solitary confinement cell for 23 to 24 hours a day results in high rates of assaults between cellmates, leading to serious injury and, sometimes, death.

The new report also confirms NPR/Marshall Project reporting that many prisoners stay at Lewisburg for years — much longer than the BOP's own limits for prisoners in its Special Management Unit, which was created by the BOP for "dangerously violent" prisoners.

In addition, the inspector general's report says officials at Lewisburg violate BOP's own rules that men with serious mental illness should, in almost all cases, be removed from the Special Management Unit.

The Justice Department report notes that the cells at Lewisburg — a prison built in 1932 — are some of the last in the federal system that still lack air conditioning. Instead, ceiling fans are used to cool the cells.

The inspectors describe a lack of mental health care at Lewisburg. It criticizes the understaffed medical office for not using innovations found at other prisons — like tele-psychiatry.

That lack of therapy and medications are at the center of a recent lawsuit against the prison at Lewisburg. "It's gratifying to see many of our claims verified by the OIG, but frustrating that the more outrageous, harmful practices are not discussed," says Philip Fornaci, project director of the D.C. Prisoners' Project of the Washington Lawyers' Committee for Civil Rights and Urban Affairs, one of the groups that filed the lawsuit in June.

Among the practices that aren't mentioned, he says, is the lawsuit's claim that instead of face-to-face counseling, prisoners are handed crossword and sudoku puzzles to do in their cells.

Fornaci praised the report for another finding, also alleged in the lawsuit: That men who arrive at Lewisburg with serious mental illnesses are denied the psychiatric medications they depend upon.

"What's important is that they recognize that BOP officials are deliberately downgrading peoples' diagnoses to make it appear that there are fewer people with mental illness in solitary confinement," Fornaci says. "We've known that for years and now they've admitted it."

The new report includes the story of a prisoner who arrived at Lewisburg from another federal prison with a diagnosis of five mental disorders and prescriptions for multiple medications. When he arrived at Lewisburg, his diagnosis was downgraded. And nine months after he arrived "the inmate was removed from his medications after the SMU Psychologist determined that his behavior was malingering rather than genuine symptoms of mental disorder." But investigators reviewed the man's case file and noted that within a year "the inmate was transferred out of the SMU for mental health reasons."

The BOP's acting director said it would adopt all of the inspector general's recommendations, including one that calls for a "comprehensive review" of practices at Lewisburg. 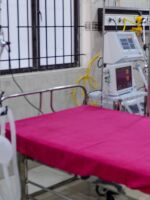