Krewson postpones town hall meeting, says discussions are happening and she hears them

She said she called off the town hall, the third of five she's had scheduled, because the discussions are “happening in the streets and in my inbox and on social media right now," she first said in a statement. "We are listening.”

After much consideration, postponing our Town Halls for this week because right now they are happening in the streets. We are listening. pic.twitter.com/VeCBOdXL6g— Mayor Lyda Krewson (@LydaKrewson) September 19, 2017

Krewson's town halls are meant to give residents a chance to talk with her and representatives of various city departments.

In her statement and in the news conference, she outlined two themes she has heard coming from protesters who are upset with the acquittal of a former St. Louis officer last week. On Friday, a judge found former St. Louis officer Jason Stockley, who is white, not guilty of first-degree murder in the 2011 fatal shooting of Anthony Lamar Smith, who was black. Prosecutors alleged Stockley executed Smith after a car chase and then planted a gun in his car. Stockley maintained that Smith reached for the gun and that he shot Smith in self-defense.

The first was of “violence, destruction and intimidation,” noting that people who gather after the official protests end are taunting law enforcement and sometimes destroying property, something she said she won't tolerate.

She also said in her statement that she'd heard concerns abuot intimidation tactics the police allegedly used Sunday night when more than 120 people were arrested.

“I want to assure all citizens that complaints of misconduct that have been made are being reviewed by the Police Department’s Internal Affairs Division,” she said.

At the news conference, she addressed the police who chanted "Whose streets, our streets," after Sunday night's arrests. "That's not an acceptable statement to make," she said.

That same night, Interim Police Chief Larry O'Toole said that the police "own the night." Krewson addressed that statement on Tuesday.

"I think that's an inflammatory comment. The police is charged with protecting the public first, and property," she said. "And, also to protect their officers."

Krewson said, however that those who serve the policy department dutifully conducted themselves professionally.

The second theme was “action,” with the Democrat saying she knows that the root cause of protests lies in the region’s legacy of policies that “disproportionately impact people along racial and economic lines."

"This is not an opinion, this is supported by stacks of numbers. This is institutional racism,” she said.

During the news conference, Krewson was asked whether the police department has a racism problem. Her answer: "Institutional racsim is present all parts of society," but that, in general, there's no more of a problem with the department than in the rest of society.

The letter mentioned a plan to expedite equality, but doesn’t give specifics. Instead, Krewson called for a change to the status quo and expresses a desire to move forward.

Follow Shula and Rachel on Twitter:  After much consideration, postponing our Town Halls for this week because right now they are happening in the streets. We are listening. pic.twitter.com/VeCBOdXL6g— Mayor Lyda Krewson (@LydaKrewson) September 19, 2017 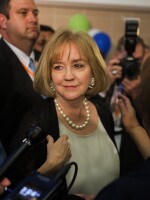 Shula Neuman
Shula Neuman is the executive editor at St. Louis Public Radio. She came the station in late 2013 as a subject matter editor, after having worked as an editor for NPR in Washington, D.C. Shula started her journalism career as a general assignment reporter for the Watertown Daily Times and made the switch to radio when she took a job as a reporter/evening newscaster at St. Louis Public Radio. After that, Shula reported on economic development for Cleveland’s public radio station. This is Shula’s second stint with St. Louis Public Radio. She says she just can’t stay away from her hometown because she’s tired of rooting for the Cardinals in absentia. Shula has a master’s degree in journalism from Columbia University; an Executive M.B.A. from Washington University in St. Louis; and a bachelor’s from Reed College in Portland, OR. She claims she has no intention of going back to school again.
See stories by Shula Neuman