Texas Holds First Primary Of The Year On Tuesday

There are a lot of Republicans retiring from Congress this year. About twice as many Republicans as Democrats plan to leave the House. And no state has more retirements than Texas, which holds the first primary vote of the year tomorrow. Christopher Connelly is a reporter from member station KERA in Dallas. And he joins me now. Good morning, Chris.

MARTIN: All right. Eight Texas congressmen are stepping down this year - all men, six Republicans. And so there are primaries happening this week to replace them. And I understand these are packed races.

MARTIN: Understanding that there's a certain political calculus that each individual has to make, but to the extent that we're able to draw any generalizations, what is behind this wave of GOP retirements?

CONNELLY: Yeah. I mean, there's sort of a few different factors at play. For one, sometimes it's just time. So Sam Johnson, for example, is 87 years old. A couple others are going to be losing their chairmanships because of term limits. And then there's two who are - who are leaving because of scandals. One of those is Blake Farenthold from Corpus Christi who used $84,000 of taxpayer money to settle a sexual harassment suit. And then there's Joe Barton. He decided to retire after a nude selfie and some sexually suggestive Facebook messages were made public.

MARTIN: So that race to replace Barton is in a district that's close to you there in Dallas. Eleven Republicans are in that primary. And you went to check it out.

CONNELLY: Right. So I went down to a candidate forum at a local racetrack in Ennis, Texas. It's about 40 miles south of Dallas. All 11 candidates were invited; nine showed up. And the organizer was trying to get them all to squeeze together onstage for a photo.

UNIDENTIFIED MAN: And if you guys could come up and do that. I don't care how you stand. Yeah. Please get up on the stage, anybody who wants to take pictures.

RON WRIGHT: Personal freedom, economic freedom, freedom of religion - all three of which are under attack by the left in this country.

CONNELLY: Then there's a former Navy pilot who says he's the right guy because he's an outsider. His name's Jake Ellzey.

CONNELLY: This whole forum was conservative candidates talking to conservative voters about conservative ideas. They all want to go to Washington to cut, cancel, audit and repeal definitely the Affordable Care Act but also a bunch of federal agencies, a high-speed rail project planned between Dallas and Houston and all kinds of spending. Immigration, though, brought out some of the toughest talk.

DEBORAH GAGLIARDI: They're in our face. They're telling us that we need to fly their flag.

SHANNON DUBBERLY: We need to fund border security. We need to build a wall.

KEVIN HARRISON: Birthright citizenship, anchor babies, we got to do away with these types of things, getting away from chain migration.

MARTIN: So a reminder - that is just one of the crowded Republican primaries that are happening this week. Again, 56 Republicans are vying for six open seats. Chris, this year, we're hearing all kinds of news headlines about Democratic enthusiasm. But based on the conversations you had there, it sounds like there's evidence of a whole lot of Republican enthusiasm.

CONNELLY: Right. Well, at least there's pent-up energy among candidates - a pent-up supply of candidates. And it kind of makes sense. Those six Republicans who are retiring, the people in those seats, some of them have been there for decades. So there's a long line of would-be candidates that built up behind them. But here's the thing - folks are also wondering if sort of having all of those candidates might actually generate enthusiasm among Republican voters. There's more stakes now. But also, there are dozens of Republican candidates out knocking on doors, talking to Republican voters instead of sort of sleepy primaries where the same guy is running for the umpteenth time.

MARTIN: (Laughter) Christopher Connelly, a reporter with our member station KERA in Dallas. I'm going to be joining Chris and the rest of the team on the ground there in Texas to cover these primaries tomorrow. Hey, Chris, thanks so much. 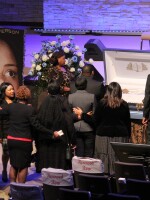 Christopher Connelly
Christopher Connelly is a KERA reporter based in Fort Worth. Christopher joined KERA after a year and a half covering the Maryland legislature for WYPR, the NPR member station in Baltimore. Before that, he was a Joan B. Kroc Fellow at NPR – one of three post-graduates who spend a year working as a reporter, show producer and digital producer at network HQ in Washington, D.C.
See stories by Christopher Connelly
Latest Stories
Support news that matters in Kansas City
KCUR serves the Kansas City region with breaking news and powerful storytelling.
Your donation helps make non-profit journalism available for everyone.
Donate Now