It's not every day you see a drag queen playing an autoharp. But for Trixie Mattel — comedian, musician and, as of last week, winner of the third season of RuPaul's Drag Race All Stars — country music and drag go together like high heels and false lashes.

Mattel is heir(ess) to a new and emerging legacy in drag, spurred on in part by the career of RuPaul herself and the success of her reality competition show Drag Race. After eight seasons and the launch of two spin-off shows (the short-lived RuPaul's Drag Uand RuPaul's Drag Race All Stars, in which fan-favorite competitors from previous seasons of the flagship show return for another chance at glory), Drag Racemoved from LGBT-focused TV channel Logo to VH1 . The jump was a testament to the show's ever-increasing popularity — nearly a million people watched its VH1 debut.

Drag Racehas both benefited from and helped foster the changing relationship between mainstream American culture and drag – and, broadly, of LGBT culture. Each week, viewers queer and straight, from blue and red and purple states, are exposed not only to these queens' talents, but also to them: struggles with coming out, addiction, homelessness, memories of the AIDS epidemic, successes and failures in their careers, relationships and supportive families. As the show has grown in popularity, it's continually looked towards the future of drag, featuring everyone from old-school club kids to. Its contestants have gone on to help form and expand on that future, earning , and runway modeling gigs both in and out of drag.

Which is how someone like Mattel (known out of drag as Brian Firkus) could rise to popularity as a kitschy-comedy-queen-slash-earnest-folk singer. She was already beloved by many Drag Race fans going into All Stars, thanks to her trademark over-the-top makeup (think Malibu mom with an overblown contour, then multiply that by a thousand) and the dry sense of humor she deployed on the seventh season of Drag Race, where she placed sixth. A year later, she teamed up with fellow Drag Race contestant Katya to start a web series called UNHhhh. It ran for 68 episodes, some of which gained over a million views on YouTube. Quirky, irreverent and hilarious, the series' popularity caught the attention of Viceland, who picked it up; it now runs weekly as The Trixie & Katya Show.

Then there's the music. Mattel has released two albums within the last year that combine elements of folk, country and Top 40. Two Birds, her debut, was released in May 2017; One Stone came out just last week, one day after accepting her crown and scepter of All Stars. Mattel admits that her Drag Race fans don't always expect to like her music – it's not exactly the standard in the clubs – but says fans are drawn to her music because of the contrast between her larger-than-life aesthetic and the honesty in her songs. She spoke to NPR Music about how her drag influences her music — and vice-versa — and clued us in to some All Stars 3 spoilers she hid on her new record.

It's been about a week since One Stone came out — how has the response been?

Oh — it's surreal. I hoped that it would sell, and I hoped that it would chart. But when the day came out when it was at No. 1 on the [iTunes] singer-songwriter chart, I was like, Oh my god. I don't write the music to sell it; I write it for my own human fulfillment. So recording it and letting people hear it and having them actually like it — it's just frosting on the cake. Or, let's say, that's just the wig on the drag queen, I guess?

You were interested in pursuing music before you even got into drag, right?

I started playing guitar when I was 13. I grew up playing guitar and writing music and I always wanted to be a songwriter and a singer and play the guitar. But while I was finishing college, my drag became lucrative, so I had to pursue what was going to pay the bills — and doing comedy as Trixie was something that I was able to market. Being a white guy with a guitar was, as it turns out, not that special.

What did you listen to growing up?

I listened to a lot of what my grandparents listened to: George Jones, Johnny Cash — a lot of old country singers. Patsy Cline. And then when I grew up, I had a really long bus ride — two hours to school and two hours home from school — every day — it was really deep country. So I used to listen to Top 40 — you know, late '90s, early 2000s radio — for four hours a day. And that was when a lot of a lot of acoustic-guitar driven pop music was really big.

I've always been obsessed with Michelle Branch. Avril Lavigne, Melissa Etheridge. Now, I've kind of gone backwards in time — now I love Jim Croce and James Taylor, John Denver. June Carter Cash. I love her. She's one of my all time favorites. Dolly — obviously obsessed. When I was younger, I thought older music was like, 'Oh it's for old people — boring!' And then I got older, I realized that [with] the simplicity in older folk and country music, there's still an emotional depth and a complexity that I think as a kid I didn't get.

Country and folk are genres where characters are really central — you get really into the heart of a person in a song, or there's a very specific story being told. I feel like there's a little bit of that in your drag too.

With Trixie, people like that I look like this fabricated painted creation, but all my comedy and my songs come from a place of reality. It's like the man behind the curtain, it's the crying clown — that's what works for people with Trixie. It's the dichotomy of someone looking like a toy, but then, you know, speaking and singing like a real boy.

There are tearjerkers on One Stone , but then there are other songs that have that same sense of humor that you use in your comedy.

I really like wordplay, I like rhymes — I like really witty, borderline-cheesy wordplay moments. I like to challenge myself to weave things in. You know, the album is actually full of All Stars 3 spoilers — I put them in for my own enjoyment, no one has even clocked it yet! There's a line in "The Well" that says, "Running's just the way I won the race" — that's in the album!

"Little Sister" is about my younger sibling and me wanting her to see the world. As Brian, I want the best life for my siblings; but as Trixie, I've seen the world, and so I can inform on that in the song. So I let Trixie have the musical skill of Brian, and then when I'm writing my music as Brian I can pull from the life experiences I've had traveling as Trixie.

I never thought the audience would ever go for me being as honest in my stand-up and my music as I am, and my audience really proved me wrong.

In terms of country and folk music — it feels like you're bringing this very explicitly gay perspective into genres that aren't necessarily known for embracing those perspectives.

I think my music is not so much about being gay; my music is about being a human being. It's not about gay relationships; it's about relationships. It's not about feeling like an outsider because you're gay. Maybe it's just about feeling like an outsider. It's funny selling records of this type in this world ... if you look at thosepublications or thosewebsites, I'm nowhere to be found. It's very weird to be, like, infiltrating.

But I love folk music and I love country and bluegrass, and it's fun also introducing my audience — maybe they are gay, and maybe they don't listen that type of music, so it's fun being their gateway drug to something I think is so great. Like, If you go to my music video for "Break Your Heart," all the comments are like, 'I would have never known I would like a song like this.'

There can be such a stigma about country music.

Yeah! It's the same as straight people liking drag, though, you know? A lot of times straight men are like, 'I would have never known I would love it.' Do you love Tyler Perry as Madea? Do you love Mrs. Doubtfire? Then you already do love drag. You just didn't even realize it.

And where to now?

Well, I'm doing 40+ dates of my show, Trixie Mattel: Now With Moving Parts. And The Trixie and Katya Show is in full swing, with Bob [The Drag Queen] stepping up to the plate, filling in for Katya. Bob is amazing. Bob and I are so different, compared to me and Katya, so our whole back-and-forth is a totally new flavor, it's so fun. And then also One Stone is still killing it on the charts!

Like I said, I write these songs for my own human development — I'm looking for answers myself when I write this music. A lot of times, I'm not sure what I'm writing or what I'm asking until the song is done. Then I look at it and I'm like, 'Oh I guess that's what I feel about it!'

Do you feel like you have a similar approach to writing with your stand-up?

With stand-up, sometimes I get to pull things out that I maybe wouldn't feel comfortable telling my friends or talking about to my boyfriend. But I'm onstage, and as long as I can craft it in a way where there's a laugh — it's like there's like this big heavy horrible thing, but you can drop it somewhere really soft, so it's not scary. It's like a whole room being like, 'Oh my god, I too have felt like a loser. I too have been the problem in a relationship. I've also been an adult who feels like a kid and doesn't feel like they ever figured out what they were doing with their lives.' Stuff you think nobody else feels, like you're the only one — you do stand-up and you talk about it and you realize we are all the same. We are all just, like, hot gluing our clothes on every day to go out into the world and do a job we're not sure we're supposed to be doing. RuPaul says we're all born naked the rest is drag. We're literally all just pretending to be someone — we don't realize how much we're all exactly the same.

This interview has been edited and condensed. 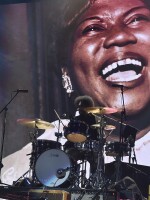