This is FRESH AIR. The Scottish writer-director Lynne Ramsay is best known for her film "We Need To Talk About Kevin." Her fourth feature "You Were Never Really Here" is a crime thriller adapted from a novella by Jonathan Ames. It won two awards at last year's Cannes Film Festival for Joaquin Phoenix's lead performance and for Ramsay's screenplay. Film critic Justin Chang has this review.

JUSTIN CHANG, BYLINE: Joaquin Phoenix has given no shortage of great pained performances in character studies as distinct as Paul Thomas Anderson's "The Master" and James Gray's "Two Lovers." But he has never played a more quietly damaged soul than Joe, the gloomy thug for-hire wandering the grim New York underworld of Lynne Ramsay's new film "You Were Never Really Here."

Joe is a former FBI agent and a war veteran, which explains the scars on his back and the efficiency with which he dispenses violence. But the deadness we see in his eyes - the sense of a human being shattered beyond repair - comes from a deeper place of torment, a childhood spent cowering in a closet to escape his father's savage beatings.

This connect-the-dots psychology might have seemed trite in the hands of a lesser filmmaker, but Ramsay gives the flashbacks an intensely visceral power. They're like jagged little shards of memory, inescapable reminders that Joe's past is forever weighing on his present. The only semblance of joy in his life comes from his tender relationship with his aging mother, played by Judith Roberts, who suffered even more brutally under his father's wrath than he did.

Now Joe confronts all this psychic pain the only way he knows how, claiming retribution for society's youngest victims. He rescues children from sex slavery, working for private clients - usually parents - who want someone who can return their kids to them quickly and safely and inflict maximum pain on the abusers. Joe gets his assignments from a middleman John McCleary - played by John Doman - who one day sends him to an especially high-profile client whose teenage daughter has been kidnapped and is being forced to work in a brothel.

(SOUNDBITE OF FILM, "YOU WERE NEVER REALLY HERE")

JOAQUIN PHOENIX: (As Joe) No.

MANETTE: (As Senator Albert Votto) McCleary said you were brutal.

CHANG: Wielding a hammer - his weapon of choice - Joe makes short work of the brothel guards and rescues Nina - that's Ekaterina Samsonov - in a brilliantly fragmented sequence that is one of the movie's many echoes of "Taxi Driver." But it doesn't take long for Joe's mission to go awry as he runs afoul of a many-tentacled political conspiracy, setting off a bloody chain reaction with dire consequences for the very few people in his trusted inner circle. "You Were Never Really Here" is superior art house pulp. And like her previous work - the terrifying "We Need To Talk About Kevin" - it confirms Ramsay as one of the most exacting stylists working in cinema today.

At a tense, diamond-hard 89 minutes, the movie feels as mercilessly stripped down to essentials as Joe himself. The craft is impeccable, from the hard shimmer of Thomas Townend's precisely framed images to the transfixing moodiness of the music - another gift of a score by Radiohead's Johnny Greenwood, the Oscar-nominated composer of "Phantom Thread." The action is brutal and unsparing, but it's also strikingly devoid of sadism. Ramsay is well-above mining violence for cheap shock effects. More than once, she skips the gory details and cuts to a body on the floor, as if to emphasize the finality of all this killing. She also allows for the occasional eruption of gallows humor. I won't soon forget the scene in which Joe and a fatally-wounded victim quietly sing along to a song on the radio - their souls briefly united in a strange, terrible intimacy.

Ramsay has altered a few details from Jonathan Ames's novella, but the intricacies of the plot are more or less beside the point. What matters here is the eerie interplay of agony and resilience we see in Joe's face and also his small, subtle transformation as the movie progresses. Against all odds, the worst possible job has renewed his will to live. When we first meet Joe, he's broken and suicidal. And the camera keeps him in tight, disorienting close-ups, as though afraid to let him out of its sight. But by the end of the movie, the frame has expanded, showing us the rooms and hallways through which he has come and gone like a swift and invisible angel of death. True to the title, it's as if he were never really here. But then as this hypnotic, hard-to-shake movie reminds us, we're all ultimately just passing through.

BIANCULLI: Justin Chang is a film critic for the LA Times. On Monday's show, Pulitzer Prize-winning journalist Lawrence Wright. He's written books about al-Qaida and Scientology. His latest is about his home state of Texas - why he left as a young man, what brought him back and what makes it special. His new book is "God Save Texas: A Journey Into the Soul of the Lone Star State." Hope you can join us. 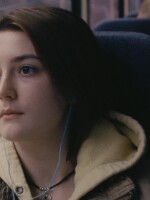