Massena, N.Y., perched on the northernmost border of New York state, is the archetype of the company town that has lost its companies. Downtown there's a pillared town hall and a Main Street lined with stately old buildings, along with an empty union hall, a couple of banks and restaurants, and a bunch of vacant storefronts — echoes of the town's more prosperous past.

Aluminum giant Alcoa drove the town's growth in the 1900s, attracted by the plentiful electricity generated by a nearby hydropower dam on the St. Lawrence River. But Alcoa has downsized greatly over the last decade. General Motors and Reynolds Metal plants closed, too. Massena has hemorrhaged hundreds of jobs.

That's why back in January, Massena's Town Supervisor Steven O'Shaughnessy was over the moon when - rather suddenly - companies that do something called "Bitcoin mining" came knocking. "They need lots of power, and they need to be able to count on it," O'Shaughnessy says. "And we can provide that."

The firms promised millions of dollars in investment and hundreds of jobs.

A quick primer on "Bitcoin mining": Bitcoin is the best known of the digital or crypto-currencies – which operate completely independently of banks. Instead, they rely on powerful computers around the world to verify every transaction that uses a digital coin. People operating those computers earn new coins for doing that verification work. That's called mining.

So companies eager to get into the cryptocurrency game have been setting up huge warehouses full of computers all around the world to mine digital coins. Cool climates are best; the computers generate a lot of heat. But more than that, mining servers gobble up vast amounts of electricity.

According to the Digiconomist blog that follows cryptocurrencies, all the Bitcoin mining computers worldwide consume more power collectively than the entire nation of Czech Republic. And as more mining companies seek their digital fortunes, that energy consumption is only increasing.

That quest for cheap power - remember the hydropower plant on the St. Lawrence that fueled Alcoa? - is why a Hong Kong-based company called Digital Skynet Limited came to Massena and set up hundreds of computers in an old factory on the outskirts of town.

Inside a Bitcoin mine

Inside the converted factory, spokesperson Tina Barksdale, wearing a comfortable blue cardigan and slacks, points to five shelves stacked with humming, shoebox-sized computers. "Those are the miners, and as you can hear, they make a lot of noise," she shouts above the din of large cooling fans.

Barksdale says Digital Skynet employs 20 people here now. But she imagines something much bigger – many more computers, and also the seeds of an innovation hub for the technology behind cryptocurrency, known as blockchain. She envisions a transformation for the town of Massena, "from being just Massena, N.Y, to being a cryptocurrency 'Silicon Valley', a place where people in cryptocurrency come," she says.

Barksdale says there could be hundreds of new technology jobs - and the support services that go with them.

"But of course," she cautions, "it all depends on the power."

A gold rush for digital coins

When the value of a traded Bitcoin soared to almost $20,000 late last year, a Bitcoin mining rush hit lots of places with cheap power, from Louisiana to Washington State.

But the job benefits were limited; it only takes so many employees to keep an eye on a bunch of computers. And in some places, the power-hungry miners started driving up electric rates for everybody else. Near Massena, the city of Plattsburgh, N.Y. put a moratorium on new mines because of rising electric bills.

So local leaders, like New York State Senator Joe Griffo, who represents Massena, began to ask, will cryptocurrency mining really create enough jobs to justify using all that electricity? And will those jobs last? "I would not dismiss [the industry] out of hand, but I think you need to look at things realistically," Griffo says. "Where's Bitcoin going to go over time?"

Digital currency values have been all over the place. Bitcoin itself has steadily dropped for most of this year. So the big question is: if the price keeps dropping, will the miners stick around?

Lex Sokolin isn't so sure. Sokolin calls himself a "financial futurist." He studies digital currencies and the blockchain digital bookkeeping technology they rely on for Autonomous Research in London, and he believes cryptocurrency has a promising future. But he thinks it's inevitable that developers will come up with a more energy-efficient way to mine them.

If that prediction is accurate, towns like Massena would lose their advantage.

Digital Skynet's Tina Barksdale says that very uncertainty is why Massena should embrace Bitcoin mining now - to establish its position in the fast-moving digital currency economy. 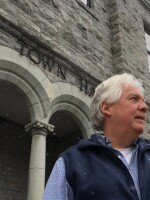