The Trump administration says its tariffs on steel and aluminum are all about protecting American companies and American jobs. But that is not how it's playing out in the automotive industry. Many small auto parts manufacturers are feeling pain from these tariffs as the price of both metals climb. NPR's Dustin Dwyer has the story.

DUSTIN DWYER, BYLINE: You may have missed it, but the auto industry has actually been doing pretty great the past few years. And that's helped a lot of smaller companies around the country that supply parts, companies like Engineered Materials Solutions in Attleboro, Mass. I recently visited the factory floor with CEO Paul Duffy. He told me his company specializes in what are called clad metal products.

PAUL DUFFY: And it's used in a wide variety of applications that people touch and feel every day, but they may not be aware that these products are really produced even in the U.S. today because an awful lot of manufacturing has moved offshore.

DWYER: EMS makes an incredible array of stuff, everything from stainless steel pots and pans to electrical switch breakers. About a quarter of the company's business is tied to automotive, making things you might never see, like tiny little parts deep inside your car's engine that keep it from overheating. Much of this business is affected by the Trump administration's 25 percent tariff on imported steel. Duffy expects the tariffs could cost the company millions of dollars.

DUFFY: It's very significant for us because we wouldn't want this to turn into a situation where it impacts our staffing or our ability to retain our labor force and grow in the future.

DWYER: For now, EMS is in a good position. It's even hiring new workers. But Duffy's not sure how long that'll continue. The theory behind the steel and aluminum tariffs is that companies like Duffy's can just switch to an American supplier of those metals. There are two problems with that theory. One is that there are some very specific types of aluminum and steel that just aren't made in the U.S. and maybe never will be. The second problem is that the tariffs have already caused the price of metals to go up, even metals made in the U.S. The federal government tracks a price index on dozens of categories of aluminum and steel. Nearly every one of them is up compared to last year. Kristin Dziczek of the Center for Automotive Research says those increases are hitting parts suppliers hard.

KRISTIN DZICZEK: Whether they're buying from a domestic supplier or a foreign supplier, their prices have gone up.

DWYER: And while it might be good for steel and aluminum companies in the U.S. to have higher prices, it's not good for the many, many companies that buy those metals.

DWYER: And those jobs, especially at auto parts suppliers, could be at risk. Ann Wilson is with the Motor & Equipment Manufacturers Association, a group that represents vehicle parts makers.

DWYER: It's not yet clear that it'll result in fewer jobs. For now, the biggest problem is just the uncertainty, and there's even more of that on the way. The Trump administration is still deciding whether to apply a new set of tariffs to entire vehicles imported to the U.S. Those tariffs could also apply to auto parts, a possibility that has a lot of companies watching and waiting before making any big, new investments. Dustin Dwyer, NPR News. Transcript provided by NPR, Copyright NPR. 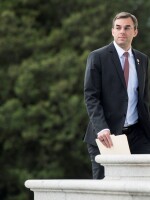 Dustin Dwyer
Dustin Dwyer is a reporter for a new project at Michigan Radio that will look at improving economic opportunities for low-income children. Previously, he worked as an online journalist for Changing Gears, as a freelance reporter and as Michigan Radio's West Michigan Reporter. Before he joined Michigan Radio, Dustin interned at NPR's Talk of the Nation, wrote freelance stories for The Jackson Citizen-Patriot and completed a Reporting & Writing Fellowship at the Poynter Institute.
See stories by Dustin Dwyer
Latest Stories
Support news that matters in Kansas City
KCUR serves the Kansas City region with breaking news and powerful storytelling.
Your donation helps make non-profit journalism available for everyone.
Donate Now