Sweden holds national elections on Sunday. And for some voters, their decision may hinge on what they think of the city where they live. Malmo is a diverse and lively city in Sweden, with nearly 1 out of every 3 residents born in another country. The city also struggles with gang-related violence. Sidsel Overgaard discovered that different people in the same city see it very differently.

SIDSEL OVERGAARD, BYLINE: It's a cloudy morning in Malmo, and Eva Winberg and her friend have decided to pay 25 krona for a bus tour.

EVA WINBERG: I like to see the Malmo and hear the history and see the sights.

OVERGAARD: These women aren't tourists. They live here. But as the bus gets rolling, it's easy to see why they might need this update.

OVERGAARD: Malmo, a city of 330,000, is adding 5,000 residents a year. Cranes puncture the skyline, and we pass one new building after another. A beautiful school...

WINBERG: Oh, the police station is going to be built here.

OVERGAARD: We also stop alongside some of Malmo's more notorious neighborhoods.

WINBERG: I've never been to this place before. This is one of the places that you avoid to go to.

OVERGAARD: But even here, the story line is positive as the guide points to physical improvements aimed at helping integration and reducing crime. Winberg is impressed.

WINBERG: It's a social thinking about this. And they have lots of things like that here.

OVERGAARD: This is a good news tour for a reason. The guide is deputy mayor Andreas Schonstrom, a member of the country's incumbent Social Democrats. He is well aware that recent news about Malmo has focused on high-profile shootings and even grenade explosions. But, he says, for most residents, that is not real life.

ANDREAS SCHONSTROM: When we look at the numbers today, Malmo is growing rapidly. We have huge economic growth. The unemployment rate is going down.

OVERGAARD: But it's a narrative that's proving hard to sell against another, more succinct message.

TOMMY JOHANSSON: We have too many foreigner in this town from the Arabian countries.

OVERGAARD: Tommy Johansson is in the center of Malmo, where a large crowd has gathered for a speech by the leader of the anti-immigrant Sweden Democrats.

JOHANSSON: We cannot go outside when it's dark anymore. We have to take taxis, everything. It's not safe.

OVERGAARD: The Sweden Democrats draw a direct line between immigration and crime. While the rate of certain violent crimes is up in Malmo, the overall reported crime rate has gone down. But Sweden Democrat voter Jonas Norden believes that's because people have given up on calling an overwhelmed police force.

JONAS NORDEN: It's so much crime, so they can't handle it all.

OVERGAARD: Twenty minutes to the south, Ibrahim Taha, who grew up in Malmo's Rosengard neighborhood, says it's not as bad as the media suggests.

IBRAHIM TAHA: Yeah. I've been living there for 17 years. I can tell you like this, all right, I had my issues with some people. But other than that, it's really safe.

OVERGAARD: But, he says, problems with integration are real. He moved here from Iraq at age 9 and didn't have an ethnically Swedish friend until age 16.

OVERGAARD: Taha believes one way to change that is by engaging in the democratic process, which is why he's here in the Holma neighborhood, trying to increase voter turnout among immigrants. Most of the young adults he approaches say they will, or already have, voted.

OVERGAARD: Syrian refugee Moada Mardeni admits she doesn't really like politics but says voting is her duty as a new Swede.

OVERGAARD: And for her new hometown.

This report is about Sweden's elections. A previous version of the headline incorrectly said Swiss elections. 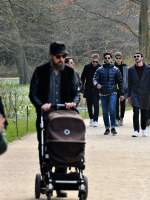