The American Dream Is Harder To Find In Some Neighborhoods

Does the neighborhood you grow up in determine how far you move up the economic ladder?

A new online data tool being made public Monday finds a strong correlation between where people are raised and their chances of achieving the American dream.

Harvard University economist Raj Chetty has been working with a team of researchers on this tool — the first of its kind because it marries U.S. Census Bureau data with data from the Internal Revenue Service. And the findings are changing how researchers think about economic mobility.

People born in the 1940s or '50s were virtually guaranteed to achieve the American dream of earning more than their parents did, Chetty says. But that's not the case anymore.

"You see that for kids turning 30 today, who were born in the mid-1980s, only 50 percent of them go on to earn more than their parents did," Chetty says. "It's a coin flip as to whether you are now going to achieve the American dream."

Chetty and his colleagues worked with the Census Bureau's Sonya Porter and Maggie Jones to create the The Opportunity Atlas, which is available to the public starting Monday.

At first glance, it looks a lot like a Google map, where users can see the whole country, or zoom in to local neighborhoods. The difference is in the amount of information that pops up when a neighborhood is highlighted.

Researchers hope these data will help communities understand and tackle the barriers that prevent people from climbing the economic ladder. They want policymakers to use the information to offer new solutions locally.

Chetty explains that the government data they are working with are kept anonymous. The information can help pinpoint the places where lots of kids are climbing the income ladder and "the places where the outcomes don't look as good," he says.

Chetty found that if a person moves out of a neighborhood with worse prospects into to a neighborhood with better outlooks, that move increases lifetime earnings for low-income children by an average $200,000. Of course, moving a lot of people is impractical, so researchers are instead trying to help low-performing areas improve.

Charlotte, N.C., has gotten a head start on this effort. The city has enjoyed strong economic growth over the past couple of decades and many people assumed the progress had been shared across the city. But in 2014, Chetty and his colleagues released data showing that Charlotte was dead last out of 50 cities at providing upward mobility for low-income kids.

"I've been a physician for a lot of years, worked with people who live in poverty, so I saw it," she says. But Garmon-Brown says she was among those who were shocked that Charlotte had come in dead last.

The news came as a loud wake-up call.

And Charlotte responded, Garmon-Brown says. She was drafted to co-chair a task force, formed by the Foundation for the Carolinas, to develop a plan to attack the problem.

The task force's report identified early childhood development, college and career readiness, family stability and strong social networks as key factors that enhance upward mobility. It singled out segregation as a key obstacle. And now, Charlotte officials are learning to use the Opportunity Atlas to effectively target some remedies, things like pre-K programs and affordable housing.

"The Foundation for the Carolinas have brought a lot of partners to the table to think about how to act on these data and I think that's the power; it's in the community collaboration and the community partnership," he says.

The future is already taking shape at Sedgefield Middle School. It's located in a majority-white neighborhood not far from downtown Charlotte, but the school's population doesn't reflect the neighborhood. Assistant Principal Eric Tornfelt says only 4 percent of the school's student body is white; the rest is almost evenly split between African-American and Hispanic students.

Tornfelt acknowledges the school has challenges. "There is significant opportunity for growth," as he puts it. "We have some great kids."

It's not unusual for a public school in Charlotte to have a student body that's largely people of color. That is because many white students attend private schools or public schools outside their neighborhoods. Those choices can hinder upward mobility for children who attend neighborhood public schools.

"Eventually, something similar is going to happen here," he says. "The demographics here are going to shift quite a bit. It's majority black and brown now, but in the coming years it will change, it'll start to look more like the neighborhood."

But there's another challenge here, beyond segregation — the lack of social networks minority children need to succeed.

In this case it may be that the majority black neighborhood of Southside Park offers young black men the social networks, friends, extended family and churches that help them get ahead. Those kinds of networks might not be accessible to them in a majority white neighborhood.

"So this permits us to start making really smart and really intentional decisions so that, 20 to 30 years down the line we can look and say, 'Yeah, that was the right call,' " he says.


Charlotte is already taking significant steps in that direction. Mecklenburg County, which encompasses the city, has committed to providing pre-K for all children. And the city has a $50 million bond issue for affordable housing on the November ballot. Matching private donations could boost the total to over $100 million.

Harvard's Chetty says he hopes the Opportunity Atlas will help communities across the country revive the American dream in their neighborhoods.

"We hope citizens, local policymakers, nonprofits, people working on these decisions can use [the data tool] to make better decisions," he says.

The Opportunity Atlas is now available to the public. You can find it at: http://www.opportunityatlas.org/ 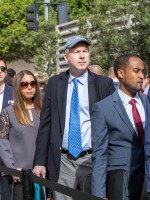 John Ydstie
John Ydstie has covered the economy, Wall Street, and the Federal Reserve at NPR for nearly three decades. Over the years, NPR has also employed Ydstie's reporting skills to cover major stories like the aftermath of Sept. 11, Hurricane Katrina, the Jack Abramoff lobbying scandal, and the implementation of the Affordable Care Act. He was a lead reporter in NPR's coverage of the global financial crisis and the Great Recession, as well as the network's coverage of President Trump's economic policies. Ydstie has also been a guest host on the NPR news programs Morning Edition, All Things Considered, and Weekend Edition. Ydstie stepped back from full-time reporting in late 2018, but plans to continue to contribute to NPR through part-time assignments and work on special projects.
See stories by John Ydstie
Latest Stories