The government blames loopholes in U.S. immigration laws for acting as a magnet for immigrants. But there's another explanation. The push factors in impoverished regions in Central America are as powerful as ever.

Huehuetenango is a province in western Guatemala that borders Mexico. It has spectacular mountain ranges, a large indigenous Maya population that lives in extreme poverty, and the distinction of sending more immigrants to the United States than any other place in Guatemala.

Our mission in traveling to Guatemala is to find out if the White House's immigration policies are making an impact here. Are people so rattled by a president who separates families, denies asylum and jails immigrants that they're staying put?

The first challenge is getting to the villages of Huehuetenango, nestled in cloud forests and river deltas.

Our SUV creeps around hairpin turns on sheer mountainsides. We pass fields of corn stunted by drought, flocks of sheep tended by Mayan women, and mansions . These big fancy houses with their columns, balustrades and spacious balconies were all built with money earned in the United States. Last year, Guatemalans working in the U.S. — legally and illegally — sent home $8.5 billion .

These castillos, or castles, as they're called, figure prominently in the calculus of why Guatemalans keep coming north.

After three hours on this twisting, tortuous road, we arrive at the village of Mixlaj where these shining villas stand next to houses of rough planks and dirt floors.

In Guatemala, you can work very hard but never be able to build a house. It is the dream of every Guatemalan to have a house.

We've come here to meet Alejandro Cano — a 22-year-old farmer who is clean-cut and solidly built. He lives in the comfortable home his uncle constructed with money he earned working in the U.S.

"In Guatemala, you can work very hard but never be able to build a house," Cano says. "It is the dream of every Guatemalan to have a house."

But a day's wage in Huehuetenango, tending a cornfield or working on a construction crew, is 40 quetzale s —equivalent to $5.23.

With this income, a family can afford to eat meat maybe once a week. They cannot send their children to school. And there is no savings to buy a motorcycle or small truck to haul their produce to market, much less build a dream house with cement blocks and indoor plumbing.

Cano says since last spring, 25 families have left the surrounding hills for the U.S.

"Everybody knows that President Trump is doing everything to kick all the immigrants out of the U.S.," he says, "but this doesn't take away our desire to go there. A man knows he can die on the journey, but he goes anyway."

A man knows he can die on the journey, but he goes anyway.

Alex Cano knows the American dream first-hand. He worked as a roofer in Jacksonville, Fla., making $120 a day, until he was arrested and deported.

Today, he is the lucky beneficiary of a U.S.-funded program called the Association for Sustainable Development of Youth, which gave him a small grant to take online classes to become a nurse.

There is no electricity in Mixlaj. So on Fridays, Cano makes the five-hour trip to the nearest city — walking and riding a public bus — to sit at a computer and go online.

"I have no plans to return to the U.S. I'll continue my studies and struggle to get ahead in my own country," Cano says.

A debt accumulated to go north

A hundred yards away on the main street, Secundino Funes lives in a rough-hewn house with chickens scurrying in and out. He's 30 years old, with a wife and five kids. He, too, makes 40 quetzales a day tending a corn plot.

"You work and you work, but the family has to eat. There's nothing left to buy anything, like a pair of boots or a kilo of sugar. You can't get ahead," Funes says.

Last year, he borrowed 85,000 quetzales, about $11,000 — an astronomical sum for a subsistence farmer — to make the trip north. Smugglers have jacked up their fees as U.S. border agents have made crossing more difficult. He paid a smuggler to take him to Florida where his brother said he could get him a farm job. Funes saw it as his only way out of penury.

But the Border Patrol caught him, and now he's in a predicament.

Some Guatemalans, like Funes and Cano, flee to the United States to improve their economic status. Others leave in a hurry to escape gang violence and extortion rings which are epidemic in Central America.

The challenge of successive U.S. administrations has been how to convince these Central Americans to stay home.

"Every year there are children who disappear when they travel to the United States without documents. Your home is here in Guatemala — our land, our future," intones an announcer while sad violas play in the background. The U.S. government-funded public service announcement is broadcast in Mayan languages in the indigenous highlands.

"These campaigns to prevent people from going: Don't let your children go north! It's too dangerous! But what is the state offering?" she says, her voice rising. "There's no sport, no art. The Guatemalan state needs to take responsibility for its citizens. Why not invest in scholarships for students?"

Washington has spent tens of millions of dollars on efforts like this PSA. The biggest program, called the Alliance for Prosperity, begun in the Obama era, tries to create jobs in Central America and reduce the need to migrate.

Smaller programs aim to make a difference in individual lives such as Alex Cano's.

"The American dream no longer has validity"

A group called the Association of Returned Guatemalans, also U.S. sponsored, helps arriving deportees and tries to convince potential immigrants not to come to the U.S .

Two of their volunteers are riding with us on our trip through Huehuetenango. The sun drops behind the mountaintops as we pull into the village of Quilin Novillo, which smells of wet earth, and wood smoke. It is dotted with sturdy, ample houses built with the wages of Guatemalans working in America as janitors, yardmen and housekeepers. The houses are billboards for the American dream. One is painted red, white and blue, with stars and stripes.

A volunteer named Lesbya Espinal addresses a dozen young people who've gathered in the center of town. She tells them they must keep studying, become professionals, and look for opportunities in Guatemala.

"The American dream no longer has validity because under the President Trump the laws are tougher," Espinal continues. "Now they punish a person for crossing the border. It's a crime."

She tells the girls how smugglers will abandon them in the desert or sexually traffic them.

She calls for questions.

"But how are we going to get ahead," she asks earnestly, "if we don't go to the United States?"

John Burnett
As NPR's Southwest correspondent based in Austin, Texas, John Burnett covers immigration, border affairs, Texas news and other national assignments. In 2018 and again in 2019, he won a national Edward R. Murrow Award from the Radio-Television News Directors Association for continuing coverage of the immigration beat. In December 2018, Burnett was invited to participate in a workshop on Refugees, Immigration and Border Security in Western Europe, sponsored by the RIAS Berlin Commission.
See stories by John Burnett 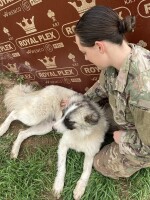