'Lie With Me' Captures The Wistfulness Of First Love, And First Loss

The problem with first love is that it's almost always followed quickly by first heartbreak. While it's true that some high-school romances endure for decades, for the most part, today's teenager in love is tomorrow's emotionally destroyed young person. Teenage love is bittersweet, but the bitter has a way of overwhelming the sweet.

Philippe, the 17-year-old narrator of Lie with Me, doesn't intend to fall in love with his mysterious schoolmate Thomas, but nobody ever chooses to set out on a path that they know, deep inside, will lead to heartbreak. In Philippe Besson's latest book to be translated into English, this time by actor and author Molly Ringwald, the novelist tells a painful story of love and loss. It's not a groundbreaking book, but it's certainly an enjoyable one.

Lie with Me is narrated by an adult Philippe, looking back on his teenage self with a bemused resignation. The younger Philippe is a quiet boy; while he has a small assortment of friends in his small French town, he's content to spend the time he's not in school reading. He's neither overly happy nor depressed, approaching life with a slightly blasé acceptance: "At seventeen, I don't dream of a modern life somewhere out there, in the stars, I just take what's given to me. I don't nurse any ambition, nor do I carry around any resentment. I'm not even particularly bored.

He develops an instant crush on his schoolmate Thomas, a shaggy-haired, brooding student who seems unaware of Philippe's existence. Philippe has no intention of making his feelings known to Thomas, realizing that outing himself as gay would complicate his life in too many ways to count. (The novel is set in the mid-1980s, when public attitudes toward LGBTQ people were even harsher than they are now.)

Philippe is shocked when Thomas asks to meet him for lunch at a cafe in town, and even more shocked when Thomas reveals that he's attracted to him. The boys embark on a clandestine sexual affair that a paranoid Thomas insists on keeping secret. Philippe is concerned for his privacy too, but not to extent that his lover is. "If I shut up, it's just to avoid being confronted by violence," he explains. "Is it cowardice? Perhaps. I prefer to see it as a kind of necessary self-protection. But I will never change. I will never think: It's bad, or It would be better to be like everyone else,or I will lie to them so that they'll accept me. Never. I stick to who I am. In silence, of course, but it's a proud, stubborn silence."

The boys' affair ends when Thomas moves out of the country, but Philippe never forgets the boy with whom he fell in love. Decades later, Philippe, now a celebrated novelist, encounters a stranger who happens to know Thomas, and finally finds out what happened to the object of his first affections.

Readers with a taste for innovative plots will likely be disappointed with Lie With Me. The storyline is a well-worn one: young love followed by young heartbreak followed by middle-aged ennui. But stories like this are common for a reason, and Besson does an excellent job describing the experience of being a young gay man. "I understand the fear and panic he carries with him," Philippe thinks about Thomas. "I know how strong this fear is and also that it can't only be the fear of being caught. It's a fear of himself too. A fear of what he is."

'Lie with Me' succeeds as a novel because of Besson's graceful writing, beautifully translated by Ringwald.

The reader never really gets to know Thomas, but this is likely by design — the young man is something of an enigma to Philippe as well, despite the boy's best efforts to get him to bare his soul. Besson renders Philippe beautifully, though, giving the boy a real sense of self-awareness, which turns into something harsher when he becomes an adult, sneering at his younger self as "an easy-going idiot" and thinking, "Today, I'd like to slap this seventeen-year-old kid, not because of the good grades but because of his incessant need to please those who would judge him."

Lie with Mesucceeds as a novel because of Besson's graceful writing, beautifully translated by Ringwald. Besson is a gifted stylist, and he infuses Philippe's story with the right notes of sadness and longing. Reflecting on his affair with Thomas, Philippe muses, "There was something in the atmosphere, something in the time and the place, that brought us together. And then everything broke — like a firework exploding on a dark night in July that spirals out in all directions, blazing brightly, dying before it touches the ground, so that no one gets burned. No one gets hurt." It's a wistful passage that perfectly captures what it's like to be young and in love, as well as a good summation of Besson's lovely novel. 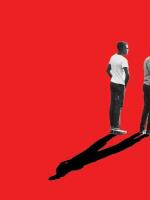 Michael Schaub
Michael Schaub is a writer, book critic and regular contributor to NPR Books. His work has appeared in The Washington Post, The San Francisco Chronicle, The Portland Mercury and The Austin Chronicle, among other publications. He lives in Austin, Texas.
See stories by Michael Schaub
Latest Stories
Support news that matters in Kansas City
KCUR serves the Kansas City region with breaking news and powerful storytelling.
Your donation helps make non-profit journalism available for everyone.
Donate Now