How Laws And Lawsuits Are Changing Abortion Access In Missouri

Missouri has long had some of the strictest abortion restrictions in the U.S. Now questions about Planned Parenthood’s license in St. Louis could mean Missouri losing its only abortion clinic. Below, find FAQs and answers based on our reporting.

Update, June 21: Missouri’s Department of Health and Senior Services has decided to deny the license for Planned Parenthood’s St. Louis abortion clinic, the only provider in the state.

A preliminary injunction is keeping the St. Louis clinic’s license in place until the judge makes a more permanent decision. As part of that injunction ruling, the judge said the state needed to make a decision to renew or reject the license before Friday. A status hearing was ongoing Friday morning.

Our original story continues below.

A St. Louis Circuit Court judge is expected to decide whether to stop Missouri from closing the only remaining abortion clinic in the state before its license expires Friday at midnight.

Planned Parenthood’s license to provide abortion services expires Friday at midnight. The St. Louis clinic can continue to provide birth control and health screenings but will have to stop offering abortions unless a judge grants a restraining order.

Missouri’s Department of Health and Senior Services says it has been unable to verify that Planned Parenthood is in compliance with state laws and regulations because several doctors have refused to be interviewed in an investigation into a patient complaint.Loading...

“The unprecedented refusal by Planned Parenthood to fully cooperate as they have in the past heightens our regulators’ concerns about what their investigation has revealed to date,” Dr. Randall Williams, director of the Department of Health and Senior Services, said in a prepared statement Wednesday.

Planned Parenthood officials said the organization has fully cooperated with the investigation into the complaint, which state officials haven’t disclosed. Dr. Colleen McNicholas, an attending physician at the St. Louis clinic, said the health department demanded that she and her colleagues “submit to interrogations with no explanation and making clear that we could be opened up to criminal proceedings or board review.”

“This is harassment — an attempted intimidation of doctors at the highest level of government in order to stop us from providing the legal, necessary and exceptional care that we have always provided our patients,” McNicholas said.

No. The closure is not related to new anti-abortion laws that Missouri’s Republican Gov. Mike Parson signed last week that ban most abortions after eight weeks of pregnancy. The new laws don’t take effect until August.


Patients seeking abortions in Missouri would have to travel to clinics out of state, most likely in Kansas or Illinois.

Hope Clinic in Granite City, Illinois, located about 10 miles from downtown St. Louis, is preparing for more patients. Trust Women clinic in Wichita, Kansas, already has to fly in doctors, and staff didn’t know what an uptick in patients from Missouri would mean for their already-overloaded schedule.

Over the past 10 years, four Missouri abortion clinics have closed as regulations have changed. The changes include:


All those limits left one clinic in St. Louis for the whole state.

Read more:  With Missouri Down To One Abortion Provider, Here's The Background On A Complicated Legal Case

Missouri is one of several states to ban abortion in the early stages of pregnancy, often before women know they're pregnant. Doctors convicted of violating the Missouri law could be sent to prison. Several states have passed similar early bans in recent weeks, but none have taken effect so far. Legal challenges are underway, and federal judges in Mississippi and Kentucky have already blocked such laws.

Have questions about abortion access in Missouri? Email ltoler@stlpublicradio.org, and we’ll add your question and the answer as we report. 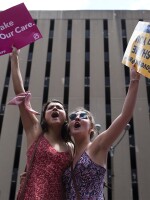 Lindsay Toler
Lindsay Toler joined the St. Louis Public Radio as digital engagement producer in January 2018. A native of Dallas, Texas, Lindsay first moved to the Show-Me State to study at the University of Missouri, where she received Bachelor’s degrees in journalism and sociology and a certificate in multicultural studies.
See stories by Lindsay Toler
Hungry For MO returns!
KCUR's podcast Hungry For MO is back with more stories about Missouri’s iconic foods, from barbecue to pizza and beyond.
Subscribe now
Latest Stories
Support news that matters in Kansas City
KCUR serves the Kansas City region with breaking news and powerful storytelling.
Your donation helps make nonprofit journalism available for everyone.
Donate Now
Related Content