Which is why in late 2015, when she started taking hormones to become more masculine looking, she did it quietly.

Harris, 37, is a systems engineer who worked at Dell, selling technology to major companies and helping them set it up.

But she says she had a tough time moving up at the computer company and was assigned to a lengthy training period, while colleagues were promoted.

She says she got heckled by co-workers when she gave presentations. And, Harris says, one of her instructors kept telling her "people have to like you for you to be able to do this job. He kept saying stuff like that to me."

NPR spoke to four colleagues with whom Harris has worked. They described a talented young woman whose career was completely derailed a few years ago. And they, like Harris, suspect she had a tough time because of the way she looks.

Her struggle at Dell led Harris to file a complaint with New York City's Commission on Human Rights, alleging the company didn't want to put her in front of customers because of her appearance.

Dell says Harris' situation was resolved amicably. But there are at least two other cases against the company from LGBTQ workers alleging discrimination. Dell, which is an NPR sponsor, denied liability in one case. The other is ongoing.

Harris says her problems happened around the same time her employer, EMC, was merging with Dell. In her complaint, Harris detailed how she kept being told she needed to keep on training. So she did — for three years.

During that time, she says, she'd speak with managers, executives, colleagues and human resources. "What is the problem? Like, if there is a problem with me, like [with] what I'm doing, can someone please speak up?" she says she asked them.

The rights of trans and gender-nonconforming people in the U.S. are starting to get more attention. Activists say limited job opportunities and lack of clear protection from workplace discrimination have helped marginalize transgender people and hurt them financially.

Over 200 companies — including Amazon, Google and Uber — have urged the U.S. Supreme Court to rule that federal civil rights law prohibits discrimination against gay and transgender workers.

The Justice Department has argued that it does not.

'Don't tell these people that you're transgender. It's a career ender.'

And there's this idea that the tech industry is a place where stuff like this doesn't happen: Scooter in to work and have piercings and tattoos? No problem. As long as you work hard, it doesn't matter who you are or what you look like.

The diversity numbers at big tech companies like Google, Facebook and Apple tell a different story. Take Facebook: Less than a quarter of tech roles there are held by women; African Americans make up only about 1%.

And when you look at Dell, you get a complicated picture.

The company has repeatedly been ranked among the 50 best for diversity. But several current and former Dell employees, who requested anonymity for fear of retaliation, said the company's New York office has the reputation of being a "boys club."

Cicilia Gilbert, who was also a systems engineer at Dell, says it's especially bad in the tech sales division. Gilbert, 58, is suing Dell for, among other things, allegedly discriminating against her for her gender transition. The case is ongoing.

She told NPR that when she decided to transition from male to female, a trans co-worker advised her: "Don't tell these people that you're transgender. It's a career ender."

In her lawsuit, Gilbert said that in late 2018, right in the middle of her transition, she was let go. "They said, 'We're laying you off because your transgender transition is impeding your ability to travel,' " she told NPR.

It's not unusual for a company as large as Dell to face discrimination lawsuits. Jennifer Davis, a spokeswoman for Dell, told NPR that Gilbert's layoff had nothing to do with her gender — it was part of a restructuring in which hundreds lost their jobs.

And Davis pointed to the company's support network for trans employees. NPR spoke to two workers who say the extensive medical coverage and support Dell offers made their gender transition possible. They said they consider themselves very fortunate to work for a company that's so inclusive.

But in 2017, the Massachusetts attorney general investigated the case of a former intern who is trans and who had complained about discrimination. Dell denied wrongdoing but paid a $110,000 settlement.

Harris says she always saw the tech industry as a place where, no matter what you look like, "if you put your head down and you learn the stuff and you do the work, you can change your circumstances."

Earlier this summer, Harris told NPR she was still on Dell's payroll, but she wasn't going into the office on a regular basis anymore.

In her complaint to New York City's Commission on Human Rights, she detailed her problems using Dell's bathrooms. "That's the truth," she told NPR. She added that after being harassed a second time about which restroom she was using, she decided to stop going to work.

Harris said she was exhausted.

A few weeks later, she left the company.

Despite her experience at Dell, Harris said she wants to keep working in the tech industry.

"I want my money. I don't want to be poor," she said. "My father, he picked cotton. My grandfather was a sharecropper. I'm a systems engineer. So, I'd rather stay." 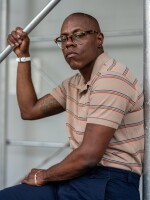