Task Force Says Every Missouri School Should Have An Armed Guard

That is the main takeaway from a report released Wednesday by a task force formed by Gov. Mike Parson in March to improve school safety. A federal panel spent much of 2018 conducting a similar review of school safety measures and released its report in December.

The report makes broad recommendations and leaves specifics up to individual schools. The panel recommends more synchronization and coordination of efforts to make schools safer.

The report calls for an expansion of both uniformed police officers serving as school resource officers (SROs) and school employees undergoing a training program to conceal carry within a school, referred to as school protection officers, or SPOs.

If schools adopt that recommendation, it would increase the number of guns in the state’s public schools.

“School districts that most effectively employ SROs have them in every building and incorporate them into training development, risk assessment, and threat assessment while understanding that SROs also have an influence far beyond their law enforcement capabilities,” the report says.

School resource officers are common in urban and suburban middle and high schools but less so at the elementary level. There are fewer police officers stationed in rural schools, where school leaders say law enforcement response time can be more than 15 minutes in an emergency.

A small but growing number of Missouri districts already allow staff to be armed, though the exact number is unknown. Most have hired a private security firm to train and arm staff. Last summer, a school district used the state’s school protection officer law for the first time to arm employees.


A national debate over arming teachers started after 17 students and staff at a high school in Parkland, Florida, were killed in February 2018. National teachers unions said their members did not want to be armed and instead called for more mental health and social-emotional resources for students.

The federal school safety commission also called for more armed personnel in the nation’s schools. Federal officials recommended a toughening of discipline practices, an area the Missouri report does not go into. 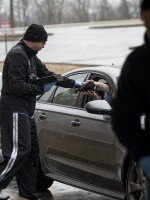 Ryan Delaney
Ryan is a reporter on the education desk at St. Louis Public Radio, covering both higher education and the many school districts in the St. Louis region. He has previously reported for public radio stations WFYI in Indianapolis and WRVO in upstate New York. He began his journalism career working part time for WAER while attending Syracuse University. He's won multiple reporting awards and his work, which has aired on NPR, The Takeaway and WGBH's Innovation Hub. Having grown up in Burlington, Vt., he often spends time being in the woods hiking, camping, and skiing.
Latest Stories
Hey, thanks for reading.
KCUR serves the Kansas City region with essential news and information.
Your donation today keeps local journalism strong.
Donate Now