Soul Line Dancing: Come For The Fitness. Stay For The Friendships

We all know we shouldbe exercising, but wanting to is a different story. But what if your exercise regimen was the highlight of your week, a chance not just to get active but to see all of your friends?

Soul line dancing – like country line dancing – is really just choreographed dance moves that you do in a group, without a partner. The Electric Slide is a classic example. The "soul" part comes from the music used — like R&B, hip-hop, soul and contemporary hits.

It's become popular as a form of group exercise, especially among African Americans, in communities across the country. People take line dance classes at local churches, gyms and community recreation and senior centers. They adopt team names like the Sassy Steppers or the Rockettes. People come for the fitness, but they stay for the friends — and the broader health benefits that come with having a supportive community.

"It's a sneaky way to get exercise in," says Washington, D.C., resident and soul dancing devotee Andrea Powell. "You're exercising but you're not labeling it as exercise, because you're just having so much fun."

"I love the people, I love the exercise, it's good for your brain," she says.

Powell has been dancing for about four and a half years with the Line Dance Addicts, a line dance class at the Turkey Thicket Recreation Center in D.C.'s Brookland neighborhood. Her fellow Addicts dancer, Daryl Watson, is a pastor at a local Baptist church. Everyone calls him "the Reverend." He says dancing helps him unwind after long days spent ministering to the faithful.

"Saving souls is good, but I also got to save mine, and part of saving my soul is to be human," Watson says. Dancing "keeps me human, keeps me healthy, in shape and fit."

Watson, Powell and other regulars attend classes at Turkey Thicket taught by instructor Paula Allen. She patiently explains the steps to a new dance until everyone present has the moves down. There's a lot of fancy-looking foot work involved – stepping forward, backward and to the side, with some sliding and turning — but it's not cardio intensive. Less heart-racing beats of a Zumba class, more playful moves akin to the Macarena or the Cha-Cha Slide.

But can something this fun really count as exercise? Absolutely, says Terri Lipman, a professor in the School of Nursing at the University of Pennsylvania. "Yes, it's dance. Yes, it's fun, but it is efficient in improving cardiovascular health and providing activity," she says.

Since 2012, Lipman has been running — and collecting data on — a community soul line dancing program called Dance for Health. Based in West Philadelphia, a community with high poverty rates and many children at risk of developing Type 2 diabetes, the program was designed to get kids and adults in the community more physically active. Her research shows that line dancing gets heart rates pumping enough to count as moderate exercise.

"I go to the gym and no one really looks very happy in the gym," Lipman says. But at the Dance for Health line dancing classes, "everyone is smiling. There is such enjoyment that is part of music and part of rhythm, and is almost innate in humans." Another bonus: Unlike running on a treadmill, line dancing is an inherently social activity – and research suggests that making exercise both fun and social are keys to creating a habit that sticks.

Lipman notes that dance in general has also been shown to help with depression and improve mobility and memory. The memory benefits, particularly in older adults, come from the fact that dance requires us to remember patterns, "so it's also muscle memory in addition to cognitive memory," she explains.

When it comes specifically to soul line dancing, Lipman's research suggests another major benefit: the social support gained from being part of a community of dancers. When Dance for Health participants were asked what brought them back to class every week, "what they told us was that it was the social support and the relationship-building that was part of this program," Lipman says. "That was something that we had seen was important, but we didn't realize it was key to what the community felt was important."

That sense of community was certainly evident among the line dancers I met through Paula Allen's dance class in D.C. Some of the Addicts even travel together to line dance gatherings around the country. Allen and the team also host events for dance teams from around the D.C. region.

One of the Addicts, Marcia Lee, started coming in 2014. At the time, she says, she was out of work and "going through some things in my life." Allen and her dance mates, she says, are "straight family. They just take you in, love you from the very beginning."

Allen says many of her students have been with her since she first started teaching the class six years ago. "The appeal is togetherness," she says.

Deedee Washington, who has been an Addict for four years, brings her toddler — an honorary Addict — with her to class. As for her fellow dancers, Washington says: "They're my line dance family." 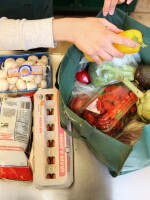 Maria Godoy
Maria Godoy is a senior editor with NPR's Science Desk and the host of NPR's food blog, The Salt. Godoy covers the food beat with a wide lens, investigating everything from the health effects of caffeine to the environmental and cultural impact of what we eat.
See stories by Maria Godoy
Overlooked
A new podcast from KCUR investigating Roger Golubski and corruption in the Kansas City, Kansas, police department.
Subscribe now
Latest Stories
Support news that matters in Kansas City
KCUR serves the Kansas City region with breaking news and powerful storytelling.
Your donation helps make nonprofit journalism available for everyone.
Donate Now