Hundreds Of ‘Orphaned Containers’ Washed Up In Missouri During Spring Floods

Floodwaters carved a path of devastation through the Midwest this year — and carried hundreds of storage tanks downstream to Missouri.

The Missouri Department of Natural Resources is collecting these orphaned containers, which range in size from small buckets to 500,000-gallon tanks. Many contain hazardous materials, including diesel fuel, pesticides and ammonia gas.

Most of the containers have washed up along the banks of the Missouri River in the northwest corner of the state, said DNR environmental scientist Stephen McLane.

“We believe a lot of the material that we recovered in Atchison and Holt County floated down from Nebraska,” McLane said.

Floodwaters rapidly inundated towns in the upper Missouri River basin this spring, triggered by heavy rains on frozen land. The speed of the flooding took many farmers in Nebraska and Iowa by surprise, carrying away storage containers before they could be secured.

The goal is to return containers to their original owners, but that can be difficult.

“In a lot of cases, there's no identification marks, there's no name; there's nothing to identify where these tanks come from,” McLane said. “So that then becomes a real challenge to get them back home.”

DNR crews have collected more than 740 containers from riverfront areas in Missouri this year, usually by airboat. With the help of a recycler in Kansas City, they’ve disposed of roughly 12,000 gallons of fuel, pesticides and herbicides.

McLane said they expect to continue collecting orphaned containers through at least January.

You can report abandoned, flood-related containers by calling the Department of Natural Resources’ 24-hour Environmental Emergency Hotline at 573-634-2436 or submitting an online report . 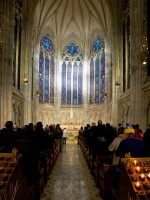