When A Somali-American Woman Was Attacked, Support Came From An Unlikely Source

Asma Jama was out to dinner with her family at an Applebee's in Coon Rapids, Minn., in October 2015, when a woman seated nearby starting getting angry. Why? Jama, who is Somali-American and Muslim, was speaking Swahili and wearing a hijab.

The woman, Jodie Burchard-Risch, demanded that Jama speak English — and then smashed Jama in the face with a glass beer mug.

"I could see it from the doctor's face that it was really bad," says Jama, who is 39. "I had lacerations across my chest, all over my hands, and 17 total stitches."

Burchard-Risch pleaded guilty to felony assault charges, admitted she acted out of bias, and served time in jail for the assault crime.

After the trial ended, Jama found support from an unlikely source — her attacker's sister.

Dawn Sahr, 50, contacted Jama online to see how Jama had been doing in the year since the incident occurred. The two met in person for the first time when they came to StoryCorps to talk about the attack.

"I wanted to reach out to you so much," Sahr says. "I just wanted to know that you were OK. That was my biggest concern."

Jama says that was her biggest concern, too.

"I used to be carefree," she says. "I used to go everywhere by myself. I would say hi to strangers, but after what happened to me, I felt like I had to look over my shoulder every time I go outside."

Sahr says she's sorry for what Jama has had to go through. She's also stopped talking to her sister and hasn't forgiven her for what she did to Jama, "because then it's telling Jodie that it's OK; and it's not OK."

After what happened in the restaurant, Jama says she doesn't feel like she can speak Swahili in public anymore.

"I realized I don't belong," Jama says. "I have to prove myself every single day and it makes me feel like I had to give up a lot of who I was."

"I'm going to pray that you can eventually become the person you used to be," Sahr says.

Jama says she believes she will get there, but it will take her a while.

"For you to stand up for somebody you don't know, and to say that what she did was unacceptable, that meant the world to me," Jama says.

Since the attack and trial, Jama started traveling to churches and organizations across the Midwest, so people who have never met a Muslim before can meet one for the first time.

Sahr's sister served 113 days in jail for the crime. Though Burchard-Risch is out of jail now, Sahr still doesn't speak to her. Instead, Sahr says she's going to support Jama in any way she can.

"You know, they say blood's thicker than water and you stand behind your family no matter what," Sahr tells Jama. "Well, you've got to draw the line somewhere, and you're my line."

StoryCorps is a national nonprofit that gives people the chance to interview friends and loved ones about their lives. These conversations are archived at the American Folklife Center at the Library of Congress, allowing participants to leave a legacy for future generations. Learn more, including how to interview someone in your life, at StoryCorps.org .

A previous version of this story misspelled Jodie Burchard-Risch's name as Jodie Bruchard-Risch. 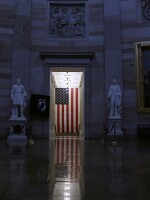