The fast-growing number of cases of COVID-19 around the country is also bringing a surge in the number of deaths. In New York City alone, the death toll is in the thousands and rising steeply every day.

There, and in places such as Detroit, Seattle and New Orleans, funeral directors are struggling to meet the increased demand. Joseph Lucchese, who owns and directs a funeral home in the Bronx, says it's unlike anything he's ever seen and it's dispelled any doubts he once had about the severity of the coronavirus pandemic.

"When this first started, I really thought this was bull****, and it's not," he says. "There is a lot of people dying out there. And it's really, really scary."

Funeral homes in the New York City area are being called on to bury more people. At the same time, because of the coronavirus, they have to take precautions that limit the number of funerals they can conduct each day. Lucchese says, under New York rules, the funerals are limited to no more than 10 people, and he can conduct just three a day.

"In between every family, we'll clean and disinfect every funeral home so there's very little chance of cross-contamination from families," he says.

With the pandemic, the process of transferring bodies from hospitals has changed.

"We go to just about every hospital and nursing home in the Bronx," Lucchese says. "Most of the hospitals have gotten these refrigerated trailers in."

Instead of going into the hospital, he says, sometimes funeral home staff members are asked to wait outside while the hospital does the paperwork.

"You need the doctors to come down and physically sign the death certificate," he explains. It's done electronically, he says, "but it's still overwhelming when they have so many deaths in the hospital."

"There has definitely been a stress on the system," Lanotte says. "Our funeral directors are working at maximum capacity."

One problem, he says, is scheduling burials and cremations. Crematories in New York state have been given permission to extend their operating hours and some, he says, are operating nearly around the clock.

In the Detroit area, where there's also been a sudden rise in the number of deaths from COVID-19, Timothy Schramm directs the Howe-Peterson Funeral homes.

"In an epidemic or pandemic, there's going to be inherent delays at cemeteries or crematories because they can only handle a certain number each day," Schramm says.

A major concern for funeral home staff, as it is for health care workers, is making sure they're protected from contagion.

"We have seen funeral directors who've become ill as a result from getting the virus," Lanotte says about the situation in New York. "We also have some who are simply in quarantine because they've been in close contact with folks who have tested positive."

With the coronavirus, funeral home staff have stepped up the use of personal protective equipment (PPE).

"We have some concerns that they are running very low, if not out of those supplies," he says.

With the new safeguards, Schramm says at his funeral homes in Michigan, they're trying to conserve their supplies.

"Our team goes through a lot of PPEs on a daily basis when you look at a two-person transfer team (and) our embalmers operating in our care centers," he says.

Like hospitals and emergency managers around the country, funeral directors are scrambling to find supply chains with available masks and face shields to keep them operating.

In the New York City area, Lanotte says he believes the next six weeks will be very challenging for funeral homes, as the fatalities from COVID-19 will keep rising.

Patrick Kearns runs four family-owned funeral homes in Queens and Long Island. In the last two weeks of March, he says the numbers began to spike — triple what they had been. The pandemic, he says, is tough on families who have to bury loved ones without a funeral or a visitation. It's also tough on his staff.

"It's an extremely emotionally and physically overwhelming task to be in a tractor-trailer that is just full of bodies," he says. "Even if you're a professional who's used at some level of being around death, to be surrounded by that much is really a lot."

David Cruz of member station WNYC/Gothamist contributed to this report . 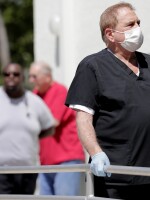