Along a vast stretch of the Missouri River, the floodwaters that ravished homes, businesses and farms last year are not a distant memory.

For farmers and others whose lives were upended by the disaster, fear runs close to the surface.

But as the difficult cleanup and recovery continues in Missouri, Iowa, Nebraska and other states, concerns have intensified between those who want there to be more control of this river and those who believe it should flow freely.

Brian Johnson farms near Percival, Iowa, in the very southwestern corner of the state. In the 2011 flood, he lost 95 percent of the 1,500 acres he farms, in addition to his home.

“We’ve fared better than a lot of people," Johnson said while touring the damage earlier this month. "This house isn’t destroyed, but … this was all covered with mold, we’ve stripped it out.”

Driving his green pickup, he passes piles of river bottom sand and silt, some stacked 20 feet high. Dry green leaves of corn and soybeans are sprouting in rows of what looks like beach sand.

“There has not been an economic study done on what happened with the flood last year," Johnson said. "We think that number is in the billions of dollars.”

Johnson said the impact of the 110-day flood goes beyond farmers. Many businesses across several states were hit. Some have joined together to form a group called Responsible River Management, seeking a bigger voice in how the Missouri is managed.

The group wants more water stored in reservoirs up north.But that kind of control is up to the Army Corps of Engineers, which manages all the dams and levees along the river, and the corps takes its orders from Congress. Iowa Rep. Steve King has introduced legislation to add storage to the reservoirs, but it has yet to be voted on.

If it were only that simple.

Some people contend that trying to control the Mighty Missouri is where problems begin.

“The water that fell in North Dakota, Montana and South Dakota -- that’s something that the river can handle, but not when you create all these handicaps in the channel and cut the channel off from the flood plain,” said Jim Redmond, who is with the Northwest Iowa Sierra Club.

Redmond lives in Sioux City, Iowa, which is right on the Missouri River. The channel is straightened and controlled up there to keep barges moving along the river down south, particularly in Missouri. The last time a barge docked in Sioux City was 2004.

“Up to this time the population based on some attitudes in the 1950s, '60s, believed they tamed the river,” Redmond said. “You have to respect the river. It is not tamed.”

But in the aftermath of last year’s flooding, it’s more than just navigation interests that don’t want the river running its natural course.

“There’s a lot of times where the famers are very much siding with the navigation industry, because the most important thing for both of them is control,” said Michael Mac, chairman of the Missouri River Recovery Implementation Committee.  The group’s 70 members represent local, state, tribal and federal interests along the Missouri River.

“When water gets real high or if it even threatens their ability to drain their fields, or if it goes over the dykes and floods their fields – there goes planting season,” Mac said.

The Army Corps of Engineers’ “master manual,” however, has to take into account the interests of eight parties, or authorized purposes as it’s called. Everything from water quality to navigational issues.

The Responsible River Management group argues that too many of the corps’ management decisions are based on concern for wildlife species.

But Redmond, with the Sierra Club, said wildlife is important. There are three endangered  species dependent on the Missouri -- two birds, the piping plover and the least tern, and a fish, the pallid sturgeon.

“(The pallid sturgeon) is like a 6-foot fish that lives to 100 years old," Redmond said. "People don’t pay attention to it because it’s rare, they haven’t seen one.”

Still, Redmond said, the concerns have to be put into perspective.

“It’s foolish to sit back and try to think about the species versus people here,” Redmond said. “That’s just absurd.”

But communities may be dividing along those lines.

David Sieck farms along the river near Glenwood, Iowa. He serves as vice chair of the Missouri River Recovery Implementation Committee, and he’s also part of the Responsible River Management group.

“I’m concerned about the species. There were things there when I was a kid that I want there if my grandkids still choose to farm can see,” Sieck said. “It’s just that it has to have some common sense.”

As he sees it, common sense is getting muddy.

“This flood has caused some ripples in our texture again, in our fight to save the species, cooler heads need to prevail and we need to think this through. That being said, a lot of groups, when their voices aren’t perceived as being heard or listened to that they go home and rally their troop and do what they have to do protect their interest,” Sieck said.

“If the people of the basin can’t agree on how we fix the problem with the species and we go back to way we used to do -- which is the courts decide -- then it’s not good for anybody.”

As for now, the Army Corps of Engineers has fixed the breached levees and construction is under way on a new setback levee near Nebraska City in southeast Nebraska. But how to control the Missouri remains an open question in this region.  In the meantime, farmers here are facing more pressing water concerns this season – they need some more rain. 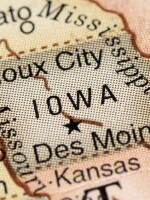