Marva Whitney: It's Her Thing

KCUR's Chuck Haddix welcomed funk singer Marva Whitney to The Fish Fry, where she talked about her start in Kansas City Kansas and working with the late great James Brown.

Kansas City, MO – The name Marva Whitney may not ring a bell to some, but for followers of soul and funk music, the Kansas City Kansas native is more than worthy of her nickname Soul Sister Number One. Her career has included working with Soul Brother Number One, James Brown, who helped her write what turned out to be her biggest R&B hit back in 1969. Brown died late last year, and had left instructions for Marva Whitney to be one of the performers at his funeral in Georgia--she sang the song Kansas City.

Chuck Haddix's full interview with Marva Whitney is available in the Fish Fry archives. With a new CD, I Am What I Am, an upcoming world tour and a book in the works, Whitney still keeps a busy schedule. She hopes someday that itinerary will include a performance right here in her hometown, Kansas City.

Chuck Haddix
In 1984, Chuck Haddix aka Chuck Haddock joined the staff of KCUR as a jazz producer. The next year, he began producing the Fish Fry. You can reach him at haddixc@umsystem.edu.
See stories by Chuck Haddix 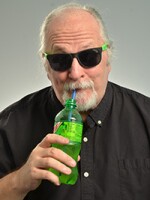