Kansas City 'Anti-Art School' Expands Community While Holding It Together

A nearly decade-old art movement called Dr. Sketchy’s Anti-Art School is one of the more quirky ways artists find community in metros across the globe. But Kansas City's version is known for taking that quirkiness a step further, and for uniting a new and growing artist community when it needed it most.

Founded in Brooklyn, N.Y., by art school dropout Molly Crabapple in 2005, Dr. Sketchy’s anti-art sessions are generally held in bars, but in Kansas City, participants head to an old Russian Orthodox church in Kansas City, Kan., that also serves as the live/work space of Rachel McMeachin.

McMeachin chose the church for its high ceilings because she is a professional aerialist — an acrobat that spins through the air suspended by long strands of silk.

“They’re done in London, New York, Tokyo, and all around the U.S., but I think Kansas City is a little different because it’s always been held in someone’s home. A relatively large home, granted, but someone’s home," says John Baker, a Kansas City Art Institute instructor who helped start Dr. Sketchy's in Kansas City.

Baker says in traditional life drawing classes there is a nude model and the mood is usually quiet and serious. At Dr. Sketchy's there are cocktails and a DJ and the models aren't naked, stoic or stationary. They are performers of all types, and after sitting in one-, five-, 10- and 20-minute increments they put on a performance.

"People have brand recognition with us which means I am about to bring in bigger names from places like Chicago, New York, Seattle and San Francisco," says McMeachin.

After paying a $10 cover charge, artists and aspiring artists file into McMeachin's church on a Sunday evening in early April to sketch burlesque dancer Kitty Noir. She is introduced by Theopatra Jones, the impossibly tall, thin and sparkly MC of Dr. Sketchy’s Kansas City.

"Ladies and gents, put your hands together for Kitty Noir!" hoots Theopatra.

Theopatra, A.K.A Sonny Williams, has had this gig for almost five years; he loves an excuse to wear stilettos and false eyelashes, but mostly, he sticks with Dr. Sketchy’s for the community.

Once in the West Bottoms

Dr. Sketchy’s Kansas City roots are in the West Bottoms circa 2007, emerging at the tail end of an era where many artists lived, worked and collaborated in the Bottom’s industrial warehouse spaces.

Prior to purchasing the church two years ago, McMeachin lived in a warehouse in the West Bottoms, surrounded by other artists, like illustrator Héctor Casanova. But, Casanova says, because the West Bottoms landscape was so desolate, it was difficult to get out and mingle with the neighbors on a day-to-day basis.

That's where Dr. Sketchy's came in.

“Dr. Sketchy’s was exactly what we needed to keep our little bohemian paradise alive," says Casanova."Whether or not there were galleries having openings, I knew that twice a month I would go to Dr. Sketchy and see all the people in the neighborhood I might not otherwise see."

He adds, “It became a really vital way of networking and keeping that sense of interconnectedness between us alive.”

McMeachin doesn't live in the West Bottoms anymore, nor does Casanova or some of the other artists that once collaborated and lived there. And even though hosting Dr. Sketchy’s is a commitment, McMeachin says she has no plans to stop anytime soon.

“After seven years of seeing some of the same faces repeatedly, it’s kind of nice to have that extended sense of family,” she says.

The other nice thing she says, is that after seven years, the event pretty much runs itself. So she sits back, sips a cucumber cocktail, and enjoys the show.

The next Dr. Sketchy’s is Sunday, May 4, and features a performer from Chicago called Po’ Chop. 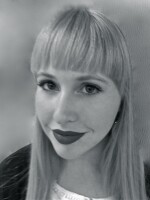