Wichita is further honoring Hattie McDaniel, the first Black actor to win an Academy Award, for her role as Mammy in “Gone with the Wind.”

Hattie McDaniel made history as the first Black actor to win an Academy Award, for her role as Mammy in “Gone with the Wind.”

Now, visitors passing her childhood home near 9th and Waco in Wichita can read all about her.

A colorful new memorial showcasing the actor’s life and career was dedicated Wednesday at 925 N. Wichita, across the street from where McDaniel once lived. It replaces a trail marker placed there by The Kansas African American Museum in 2011, which was removed after the sign's sponsor went out of business.

About 100 people gathered near the new marker on a sunny afternoon to remember McDaniel and honor her life. Among them was Ebony Clemons-Ajibolade, who read an original poem, “Black Not Accepted,” by Kevin John Goff, a descendant of McDaniel’s.

“But Wichita accepts her,” Clemons-Ajibolade read. “All of you here today accept her. You understand. You try to hold back the tears, for you were born in that everyday kind of pain that she knew all too well.”

The new marker relates McDaniel’s remarkable history: Her father, Henry McDaniel, was a former slave who fought in the Civil War. He moved his family to Manhattan, Kansas, and then to a portion of Wichita previously known as the “Black District.”

Hattie McDaniel, the youngest of 13 children, moved with her family to Colorado when she was 5. She began her career in vaudeville and was a talented singer, songwriter, playwright, dancer, radio show host and comedienne.

When “Gone with the Wind” was set to be released in 1939, the producer scheduled a gala premiere in Atlanta, the hometown of author Margaret Mitchell. Because of Jim Crow laws in effect at the time, McDaniel and other Black actors were denied entrance to the premiere, and their photos were removed from a souvenir program.

Denise Sherman, executive director of the Kansas African American Museum, choked up toward the end of the dedication ceremony as she reflected on McDaniel’s career and its impact on Black history.

“I want to really share with you how blessed we are today,” Sherman said. “That we can come together and recognize an awesome African-American woman who endured so much but left a positive legacy for all of us.”

The historical marker is part of an initiative between The Kansas African American Museum, the city of Wichita and KMUW.

Carla Eckels, KMUW’s director of cultural diversity, news and engagement, helped raise interest and funds for the historical marker after interviewing fellow Wichitan Karla Burns at the site in 2019. Burns, a Broadway performer who portrayed McDaniel in a musical called “Hi-Hat Hattie,” was distressed that the marker noting the actor’s birthplace had been removed.

“You never know where a story will take you,” Eckels said Wednesday. “After the interview aired, there was an outpouring of calls and emails from KMUW listeners. . . And she now has a historic marker in her birthplace — Wichita, Kansas.

“As you will read on her historic marker, she lived her life with dignity and grace, proudly and bravely serving as an inspiration and shining example to all who knew her and for the generations to follow.”

You can view the new historical marker from a walking and biking path just east of Waco, between north 8th and 9th streets.
Copyright 2021 KMUW | NPR for Wichita. To see more, visit . 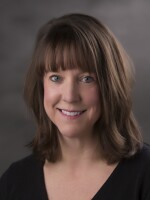 Suzanne Tobias
Suzanne Tobias writes editorials and opinion columns for The Wichita Eagle, where she has worked as a journalist for nearly 30 years. She also oversees the Eagle’s books coverage and coordinates the #ReadICT Challenge, an annual effort to encourage Wichitans to explore new authors and genres and just to have more fun reading.
Latest Stories
Support news that matters in Kansas City
KCUR serves the Kansas City region with breaking news and powerful storytelling.
Your donation helps make non-profit journalism available for everyone.
Donate Now
Related Content