You've heard of bird watching and whale watching. But wolf watching? Well, it turns out an entire industry of tour companies has cropped up outside of Yellowstone National Park.

Montana Public Radio's Dan Boyce got the chance to see and hear a wild wolf pack.

DAN BOYCE, BYLINE: The first hints of light are just starting to brighten the morning sky, as Nathan Varley and I head into Yellowstone in his black Suburban. We drive winding snowy roads through the Blacktail Plateau.

DR. NATHAN VARLEY: It's a great area to find wolves because it's the habitat for their primary prey in the winter, which is elk and bison.

BOYCE: Varley grew up just outside the park. And it's here where wolves killing livestock and big game have created the passionate controversy around these animals. Varley earned his Ph.D. studying wolves. But academia wasn't a good fit. So about six years ago, he started a wildlife tour company called The Wild Side.

VARLEY: We've been adding programs, doing higher volume each year than the year before.

VARLEY: I think this could make a good sighting for us.

BOYCE: We're walking out to a bluff overlooking Slough Creek. Varley directs me to a spotting scope pointing across the valley.

VARLEY: Look through here. You say, I can...

About a dozen, more than a half mile away.

DARREN SANDAY: It seems like they've already had their breakfast.

BOYCE: That's Englishman Darren Sanday. He and his wife, Beverly, are here on their first winter tour of the park.

BEVERLY SANDAY: All of the wolves have their heads raised, some are still laid down. Big gray at the top of the hill - fully extended head back, thrown back.

BOYCE: And then, we hear it.

SANDAY: It's something that you will not hear not hear as a normal, day-to-day person.

SANDAY: It's unearthly. It's magical. It's mystical sort of sound.

SANDAY: And it goes through you.

SANDAY: And it seems to bounce off everywhere. So while they are howling it's like nothing else goes on.

BOYCE: They howl for about two minutes. Afterward, we head back to the Suburban.

Varley says his typical clients have idealized, romantic notions of wolves. They expect noble creatures that mate for life and only kill what they need.

VARLEY: Well, the reality is they're top carnivores and predators and they're effective at being that way, because they're these very honed, skilled killing machines.

BOYCE: Nathan Varley is not romantic about wolves. He's respectful, both as a scientist and as a businessman. 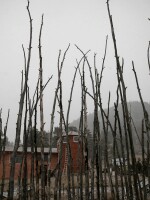