'Lifespan': What Are The Limits Of Literary License?

When an author writes something that's supposed to be a true story and readers discover he's stretched the truth, things can get ugly fast. Recall Oprah Winfrey's famous rebuke of author James Frey for making up much of his memoir, A Million Little Pieces. "I feel duped, but more importantly, I feel that you betrayed millions of readers," she told him.

Now a new book is making waves by defending an author's right to embellish the facts. The book is called The Lifespan of a Fact, and is a collaboration between author John D'Agata and his former fact-checker, Jim Fingal.

Ten years ago, D'Agata was in Las Vegas when a 16-year-old boy committed suicide by jumping off the Stratosphere Tower. D'Agata wrote an essay about the tragedy — but in the telling, he took a generous amount of artistic license.

"All of which I was completely open about, but was unwilling to budge on," D'Agata says. "I was too enamored, I guess, of my pretty sentences to alter them in any way."

Harper's, which had originally commissioned the essay, rejected it because it played so loose with the facts. It was eventually accepted by the magazine The Believer, where Fingal, an intern at the time, was put on fact-checking duty. Fingal expected to find maybe 10 inaccuracies or inconsistencies in its 15 pages — instead his response ended up filling more than 100 pages.

This report was the seed for The Lifespan of a Fact, which reprints Fingal's queries alongside the original essay.

D'Agata's piece began as follows: "On the same day in Las Vegas when sixteen-year-old Levi Presley jumped from the observation deck of the 1,149-foot-high tower of the Stratosphere Hotel and Casino, lap dancing was temporarily banned by the city in thirty-four licensed strip clubs in Vegas ... and a woman from Mississippi beat a chicken named Ginger in a thirty-five-minute-long game of tic-tac-toe."

While fact-checking, Fingal found that the lap-dancing ban hadn't actually taken effect by that day. "John's claim here isn't technically accurate," he wrote. He called into question the number of strip clubs in Vegas ("Not sure where John got this number from."), and pointed out that the tic-tac-toe game with the chicken actually occurred a full month after Levi Presley's death.

And that's only a selection of the factual discrepancies Fingal found in the first sentenceof the essay.

"It was interesting, the sheer number of sources I needed to consult in order to break down a single sentence," Fingal says. These sources included D'Agata's notes, a coroner's report, newspaper articles, websites and historical databases.

The Lifespan of a Fact also contains the correspondence that passed between D'Agata and Fingal during the fact-checking process. When Fingal got in touch with D'Agata to ask some follow-up questions, the author wasn't pleased.

"Initially, I hated him. I was appalled and I was offended in the way that you get offended when someone points out that you are a big, ugly liar," D'Agata says.

So why did D'Agata make things up? Why did he make it seem that all of the events — some extremely trivial — happened on the same day?

"Because it's more dramatic," D'Agata says. He argues that, in the age-old art form of the essay, the greater point is more important than the details.

He paraphrases T.S. Eliot, saying, "Sometimes we misplace wisdom for information. Accumulating all of this data isn't really going to provide us with the answer we need. We need another approach, and perhaps that approach is one that's more meditative, one that isn't relying solely on gathering facts."

D'Agata also points out that we often apply a kind of double standard to the truth, depending on the perceived seriousness of the subject matter. "I don't think it's OK for us to say, 'In your memoir about growing up and liking pie, it's completely OK to alter the facts, but when you're dealing with huge issues like suicide or nuclear waste or whatever, it's not OK.' I mean, the subject in this essay is amped up to get us to pay attention."

Nevertheless, when readers feel they've been lied to, they feel betrayed.

"It is important, and it's something that publishers think about all the time," says Jonathan Burnham, a senior vice president at HarperCollins.

Burnham knows a thing or two about the trickiness of truth claims in creative nonfiction — he is the one who gave James Frey a second chance after the A Million Little Pieces scandal. He points out that the medium is important; the expectations are different for newspapers, magazines, literary journals and books.

"But one of the most problematic issues that lies at the heart of all this is this philosophical conundrum: What is the truth? Because the truth is often so subjective," Burnham says.

And The Lifespan of a Fact has one more trick up its sleeve. The correspondence between D'Agata and Fingal, as it turns out, was largely invented for the sake of the book. And although Fingal swears that all of the fact-checking is real, much of it was done specifically for this project.

A revelation like this can make readers feel like the rug was pulled out from under them. Burnham says that this happens when there is no disclaimer.

"It's an almost essential piece of qualifying information that alerts the reader to the fact that not every single word in this book is true," Burnham says.

But D'Agata says getting a strong reaction is the point. "That, I firmly believe, is the job of art. And we can't have those experiences that break us open to something new if we are cued ahead of time." 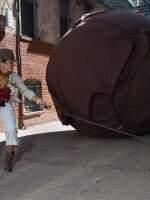