Encounters between humans and bears have risen in Western states, especially in Wyoming and Colorado. That's due largely to drought. Bears are traveling longer distances for food because the berries they usually eat have dried up.

As we hear from Aspen Public Radio's Marci Krivonen, hungry bears are turning to dumpsters, kitchen cabinets and refrigerators.

MARCI KRIVONEN, BYLINE: Not long ago, a black bear made three stops in one Aspen neighborhood on the same night. The bear got into Brad Smith's shed.

BRAD SMITH: There was a small hole from the dumpster here. And he was able to get a paw in there and just rip this entire wall right off.

KRIVONEN: Smith lives on the edge of town.

SMITH: And he really wasn't that big a bear. I mean, I would guess 150 to 200 pounds so fairly young, but he was very strong.

KRIVONEN: The bear was after garbage inside the shed. The trash is drawing more bears in search of food into resort towns in the central Colorado Rockies. In July alone, the Aspen Police Department took more than 100 calls of bears getting into trash and breaking into homes. Officer Charlie Martin responds to those break-ins. He says the goal is to keep both the people and the bear safe, and limit property damage.

KRIVONEN: Martin says some bears are picky, taking just a jar of peanut butter from a cabinet, while others are greedy, tipping over refrigerators.

RANDY HAMPTON: It's harder to find that forage source. It's not that there's no food. It's just that you've got to work harder as a bear to find the food that's out there.

KRIVONEN: Randy Hampton is a spokesman for the Colorado Parks and Wildlife Department. In the Aspen region, wildlife officials have put down 23 bears this summer alone. That's more than double the number euthanized last year. Bears are killed as a last resort. The drought has dried up many of the chokecherry and acorn crops that normally grow abundantly, so the bears must search for their dinner. Hampton says part of the problem is that people have taken up residence in the bears' habitat - building homes on mountainsides.

HAMPTON: Bears have to travel more to find that food, and when they do that in a state with 5.2 million people living here and many, many more recreating here, they're encountering campgrounds and human food sources.

SMITH: You can see there's still the wood paneling there, up high, and we replaced our plywood there.

KRIVONEN: Back at Brad Smith's house in Aspen, he points to the back of his shed. It's patched now with an added layer of plywood. He says he's not taking any chances, so he's bear-proofing the shed. This fall, wildlife managers expect bear run-ins to increase even more in Colorado, Wyoming and throughout the west. That's because the bears are getting ready for hibernation and taking in up to 20,000 calories a day. For NPR News, I'm Marci Krivonen. Transcript provided by NPR, Copyright NPR. 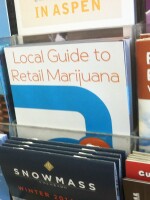 Marci Krivonen
Originally from Montana, Marci grew up near the mountains and can't get enough of them. She began in broadcasting in Missoula, Montana where she anchored Montana Public Radio's local Evening Edition news program. She then picked up a camera and tripod and worked for Missoula's local CBS television station as a reporter. Shortly after that, she returned to radio and became the Assistant News Director at a radio station in Oshkosh, Wisconsin. Marci began at Aspen Public Radio in 2007 as the station's morning host and reporter. Although you can occasionally hear Marci in the mornings, she is now quite content to be sleeping in and reporting all day. When not at the station, Marci is on her road bike, meeting people, or skiing.
See stories by Marci Krivonen
Latest Stories
Support news that matters in Kansas City
KCUR serves the Kansas City region with breaking news and powerful storytelling.
Your donation helps make non-profit journalism available for everyone.
Donate Now