Hospital Bids Bye-Bye To Big Macs, Others May Follow Suit

The McDonald's at the Truman Medical Centers' main campus in Kansas City, Mo., has closed, ending an epic, two-decade stint inside the hospital and making it the fifth health facility in the past few years to give the Big Mac the boot.

Earlier this year, hospital CEO John Bluford told The Salt that the presence of the McDonald's — located just feet from a revamped cafeteria touting low-calorie-food options and reduced sodium, fat and sugar in its meals — was sending an "inconsistent message."

The relationship between hospitals and fast-food chains is a complicated one. Decades ago, McDonald's restaurants popped up in hospitals from New York to Iowa to California, with leases for as long as 30 years. Hospitals found the long-term agreements financially appetizing. And many patients, visitors and staff have appreciated the availability of an inexpensive, familiar shake or burger.

The leases, though, have made it difficult for places like the Cleveland Clinic, a national leader in wellness, to oust their McDonald's.

Truman wouldn't disclose details of its deal, but the McDonald's lease ended early. "This was a mutually agreed upon decision between two businesses," Bluford said in a statement to hospital staff at the end of October.

So are other hospitals losing their taste for McDonald's, too?

Lurie Children's Hospital of Chicago (formerly Children's Memorial Hospital) moved into a new facility this spring but didn't take along the McDonald's that was on its old campus for 15 years. Julie Pesch, a Lurie spokesperson, says the hospital just didn't have enough space for the restaurant.

"We chose McDonald's many years ago as a special treat for sick kids going through difficult treatments," Pesch says. But, "everything needs to be in moderation. We were not trying to break our lease with the McDonald's."

Similarly, Kosair Children's Hospital in Louisville, Ky., has no plans to keep its McDonald's once the lease expires in four years. McDonald's has been present since the hospital's opening in 1986, but the facility would prefer to use the space to create its own cafeteria. It currently relies on one at a sister hospital across the street.

Big Macs aren't the only food item on their way out of these medical centers. Children's Mercy Hospital, located just a few blocks from Truman in Kansas City, doesn't have a McDonald's, but it will soon be removing all regular soda and sugared beverages from its campuses. The move follows a slew of wellness efforts across the country, in part aimed at improving hospital food options.

"The obesity epidemic among children and adults is doing a lot of driving of the changes at hospitals," says Persis Sosiak, director of public health and research at the Cleveland Clinic. "I think a lot of systems are starting to evaluate what they view as wellness."

Children's Mercy says it drew inspiration for its beverage policy from a new , "Hospital Healthy Food Commitment." The program asks hospitals to make changes in nine areas by 2015, ranging from offering at least one wellness meal a day on cafeteria and patient menus to getting rid of all fried foods. More than 150 hospitals are already onboard. 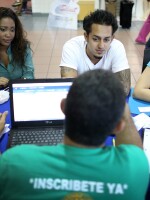