With Fiscal Cliff Around The Corner, Senate Adjourns For The Night

Senate negotiators failed to reach a deal Sunday on averting the "fiscal cliff," with the chamber adjourning for the night and only one day remaining before a package of spending cuts and tax increases automatically kicks in.

Majority Leader Harry Reid said the Senate will go back in session at 11 a.m. ET Monday. It's at least theoretically possible that negotiators might reach a deal and the Senate will have a package to vote on when it reconvenes Monday, meaning the measure could go to the House — where it may or may not come to the floor for a vote.

But even if there is no Senate vote Monday, negotiations could continue all the way into the next Congress, which convenes Thursday.

Majority Leader Harry Reid said Sunday that negotiations will continue and that "there is still time left," though he said the parties remain far apart on the issues. On Sunday afternoon, Senate Minority Leader Mitch McConnell said he sought help from Vice President Joe Biden to reignite talks.

NPR's David Welna reports that if the two sides can't come up with a bipartisan deal, Senate Democrats' backup plan is to hold an up-or-down vote on President Obama's proposal Monday. The president's plan would extend tax cuts on income below $250,000 and renew unemployment benefits that are set to expire for about 2 million people.

Speaking on Meet The Press Sunday morning, Obama said, "The pressure's on Congress to produce."

NPR's David Welna reports the GOP's latest offer was made Saturday night at 7 p.m. ET, but had yet to receive a response.

Following McConnell on the Senate floor, Democratic Sen. Harry Reid confirmed that his party was currently unable to make a counteroffer. While McConnell has shown "good faith," Reid said, some pretty big issues still divide them.

In addition to speaking with Democratic Sen. Harry Reid, McConnell said he's also called Vice President Joe Biden "to see if he could help jump-start the negotiations on their side." McConnell said he has worked with Biden successfully in the past.

"The consequences of this are too high for the American people to be engaged in a political messaging campaign. I'm interested in a result here. And I'm willing to work with whomever can help," he said.

A GOP aide tells Welna there are a number of sticking points, including taxation levels on large estates and the cut-off point for income levels eligible for extended tax cuts. Welna reports:

"He said Democrats have made two proposals since Friday; Republicans have made four, including their latest from last night."

"It's not clear yet how [Biden] might intervene in what's clearly to become a do-or-die moment in these talks. The Senate GOP and Democratic caucuses are scheduled to meet separately behind closed doors at 3 p.m. to discuss where things stand."

Any agreement would fall far short of what was initially envisioned, The Associated Press reports. The original idea was to come to a comprehensive agreement that would serve as an alternative to the so-called "fiscal cliff," the deep, automatic spending cuts and tax increases set to begin on Jan. 1. The AP continues:

"Instead, their compromise, if they do indeed cut a deal, will put off some big decisions about tax and entitlement changes and leave other deadlines in place that will likely lead to similar moments of brinkmanship, some in just a matter of weeks."

Current negotiations do not include discussion of the nation's debt limit, for example, even as the country is on the brink of reaching it.

There appears to be no deal in sight for Sunday, Welna reports. In remarks on the Senate floor, Reid said he was "gratified" to hear that Republicans had pulled the chained CPI off the table but that there was "still significant distance between the two sides."

"There's still time left to reach an agreement, and we intend to continue negotiations," he said.

Reid said and that "perhaps" there will be further announcements at 11 a.m. Monday.

Welna tells Jacki Lyden, host of weekends on All Things Considered, that Republicans have said they won't demand that chained CPI be included in the deal. The New York Times reports:

"Senate Republicans emerged from a closed-door meeting to say they agreed with Democrats that the request — which had temporarily brought talks to a standstill — was not appropriate for a quick deal to avert the tax increases and spending cuts starting Jan. 1."

One of the main issues holding back the negotiations is a proposed change to how the government measures inflation. A Senate Democratic aide tells Welna that Democrats believed the "chained CPI" (consumer price index) was off the table for a small agreement, but says Republicans have insisted on keeping it part of any deal. Overtime, the chained CPI would cause cuts to benefits like Social Security that Democrats have tried to protect.

When Congress was debating raising the debt limit last year, the chained CPI was part of a plan to reduce the nation's deficit.

At the time, NPR's Scott Horsley spoke with Marc Goldwein, then a staffer for President Obama's fiscal commission, about what this alternative inflation measurement was. He said that the current measurement tends to overstate the rate of inflation, and since government programs grow at the rate of inflation, the chained CPI could produce big savings over time. Those savings would come from programs like Social Security and in the form of tax revenue.

Goldwein says adjusting this measurement wouldn't make immediate, severe cuts. Instead, it would help deficit reduction over the medium and long term.

A White House spokesman tells NPR's Scott Horsley that the vice president is now at the White House and that talks continue. 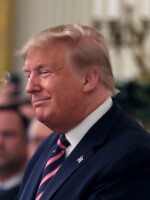 Dana Farrington
Dana Farrington is a digital editor coordinating online coverage on the Washington Desk — from daily stories to visual feature projects to the weekly newsletter. She has been with the NPR Politics team since President Trump's inauguration. Before that, she was among NPR's first engagement editors, managing the homepage for and the main social accounts. Dana has also worked as a weekend web producer and editor, and has written on a wide range of topics for NPR, including tech and women's health.
See stories by Dana Farrington
Latest Stories
Hey, thanks for reading.
KCUR serves the Kansas City region with essential news and information.
Your donation today keeps local journalism strong.
Donate Now
Related Content