Finally this hour, a new perspective on the enduring influence of The Beatles. It comes from another four-piece British rock band called Temples. The group is from the town of Kettering. Critics have been raving about them since last summer. Their debut album, "Sun Structures," has now been released here in the U.S. And hearing it might whisk you away to 1960s Liverpool. Here's our critic, Tom Moon.

TOM MOON, BYLINE: If nothing else, Temples has impeccable timing.

MOON: The band is releasing its debut album in the middle of the current nostalgia boomlet over The Beatles and their first appearance on "The Ed Sullivan Show" 50 years ago. When I heard this rhythm guitar line, I had to give it up. Somebody in the band's operation is pretty shrewd.

JAMES EDWARD BAGSHAW: (Singing) One night, you came on over to me. Late night, we shared a drink or three. Night, night, I read a proverb to you. That night, she left a room with a view. Take all the time, time that you want to. Make up your mind, mind how you go. Take me in time, time to the music. Take me away to the twilight zone.

MOON: Like many rock acts before it, Temples can't hide its admiration for The Beatles. The singer James Bagshaw, who recorded and produced the album in his house, is infatuated with The Beatles' clever writing and, really, everything about vintage rock in general. His songs contain sugary 1960s style vocal harmonies, chiming 12-string guitar textures and, unfortunately, blurry sonics that recall the cassette era.

MOON: Through the haze, the band's originality doesn't necessarily hit you over the head. It becomes more distinct on this track, "Colours To Life."

(SOUNDBITE OF SONG, "COLOURS TO LIFE")

BAGSHAW: (Singing) Blue, rest into the sea. Choose visions, wake from deep. Painting ourselves on a stained glass floor. The things we discussed are disguised until unveiled.

MOON: Temples started in the summer of 2012 as a duo. Bagshaw and bassist Tom Warmsley posted a video of their very first recording on YouTube and quickly built a following that included record labels and such luminaries as Noel Gallagher of Oasis. Then came other homemade videos. A proper rhythm section was eventually hired. And by July 2013, Temples was on the bill for a huge Rolling Stones show in London's Hyde Park.

BAGSHAW: (Singing) Mesmerize analyze everything that you need.

MOON: The album documents the band's rapid ascent. It joins the early singles with more ambitious recent recordings, all of them loaded with trippy imagery and soaring refrains. Maybe the nostalgia over the beginnings of Beatlemania has you wondering if the Fab Four's inspiration lives on. It does, in surprisingly creative ways in the music of Temples.

BAGSHAW: (Singing) Tears fell upon the fire, fell upon desire early in the morning. Age fell into the seas, sunset of the east, you and I alone here.

BLOCK: We're hearing the debut album from Temples. It's called "Sun Structures." Reviewer Tom Moon is the author of "1,000 Recordings To Hear Before You Die." 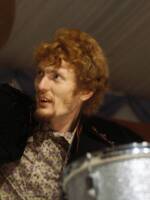