Bob Motley, a 91-year-old from Kansas City, Mo., has lived through remarkable times in our history.

His story is one of a black man in love with baseball. Racial integration didn't come to the major leagues until 1947, when Jackie Robinson broke the color line at first base for the Brooklyn Dodgers.

But it was another 19 years before a black man, Emmett Ashford, appeared behind home plate. In the interim, black umpires called balls and strikes in the Negro League.

He tells Tess Vigeland, guest host of NPR's weekends on All Things Considered, that his umpiring career began as he recovered from a gunshot wound at a military hospital on Okinawa.

"I could look out the window and see there was a ball field, so I decided I'd hop down with my crutches. And they needed an umpire," he says.

So they gave him a mask and chest protector, and he began calling balls and strikes for the Marines.

Motley was eventually discharged from the U.S. military with a Purple Heart. When he moved to Kansas City, he went to the nearby stadium and asked if they needed an umpire. The chief umpire initially turned him away.

"He said, 'Kid, you don't know nothing about umpiring.' I said, 'I umpired in the Marine Corps,' " he says. But the chief umpire sent him away.

He was back the next week, asking again. Eventually, thanks to his determination, he was given a chance to umpire at third base. The president of the league happened to be there and told Motley he did a good job, and offered him a job to start traveling with the league.

There was one condition: he had to ride on the bus with the players, the same players he'd be making calls against.

"Willie Mays, Hank Aaron, Satchel Paige; I didn't know at that time they [were] that good," he says.

Ten years into his umpire career, Motley finally went to umpire school in Florida. He was the first black person to do so after, a law in the state banning whites from teaching blacks was lifted.

Going to umpire school is required to be an ump in the major leagues. But once he graduated, despite finishing at the top of his class, Motley was not offered a job. The only time he got called to the major leagues is when their umpires were on a strike, and Motley was asked to cross the picket line.

Motley says he asked if he would have a job after the strike was over.

After that, he said he wasn't going to try for the major leagues anymore. But he kept umpiring — and eventually, helped found a museum dedicated to preserving the history of the Negro League. 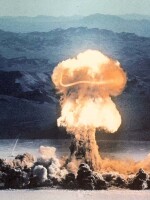