The Missouri Coalition for the Environment is one of several groups filing suit against the U.S. Nuclear Regulatory Commission to try to get the agency to address the long-term storage of nuclear waste.

That suit follows similar cases filed by the states of New York, Connecticut, and Vermont, the Natural Resources Defense Council, and the Prairie Island Indian Community in Minnesota.

Diane Curran is one of the attorneys representing the Coalition and other petitioners.

"The purpose of this lawsuit is to force the NRC to reckon with the serious safety and environmental risk posed by spent fuel, and also the cost of taking care of it, before they license reactors," Curran said.

The Missouri Coalition for the Environment’s Ed Smith says it’s time to stop kicking the can down the road when it comes to the risks and costs of nuclear waste.

"The Nuclear Regulatory Commission is not doing its job, that's what it comes down to," Smith said. "And that’s to have a plan for long term waste storage, and make sure that it’s protective of the environment." 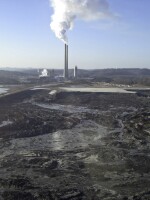 Véronique LaCapra
Science reporter Véronique LaCapra first caught the radio bug writing commentaries for NPR affiliate WAMU in Washington, D.C. After producing her first audio documentaries at the Duke Center for Documentary Studies in N.C., she was hooked! She has done ecological research in the Brazilian Pantanal; regulated pesticides for the Environmental Protection Agency in Arlington, Va.; been a freelance writer and volunteer in South Africa; and contributed radio features to the Voice of America in Washington, D.C. She earned a Ph.D. in ecosystem ecology from the University of California in Santa Barbara, and a B.A. in environmental policy and biology from Cornell. LaCapra grew up in Cambridge, Mass., and in her mother’s home town of Auxerre, France. LeCapra reported for St. Louis Public Radio from 2010 to 2016.
Latest Stories
Support news that matters in Kansas City
KCUR serves the Kansas City region with breaking news and powerful storytelling.
Your donation helps make non-profit journalism available for everyone.
Donate Now