Missouri attorney general says Walgreens has had a relapse

Missouri Attorney General Chris Koster is back in court to hold Walgreens accountable for what he says is purposefully deceptive pricing.

Koster filed a motion for contempt Tuesday in Jackson County Circuit Court, accusing Walgreens of violating a 2014 legal order to remove expired price tags and stop charging customers more than the prices listed on shelves. An investigation launched in July of this year found more than 1,300 expired tags in 49 stores across the state.

“Consumers have a right to rely on the pricing that they see on the shelves without having to verify the cost of each item in their basket when they go up to the cash register,” Koster said at a press conference in St. Louis today. “Instead, Walgreens continues their shoddy business practice, putting the burden on customers to ensure they’re not being overcharged.”

Koster originally sued the Illinois-based company in 2013 for “engaging in false, misleading and deceptive advertising and pricing schemes,” after which Walgreens agreed to pay for independent price auditing for three years.

But 30 stores across Missouri failed to meet the audit’s mark of at least 98 percent price accuracy since the legal agreement, with some stores failing more than once and one store failing six times in a row. Walgreens paid $136,000 to the state for failing the audits, but the company now faces a $5,000 fine for each expired tag found in this year’s investigation as well as a penalty for every day an expired tag is found hanging in a store in the future.

Walgreens could also have to pay customers: Under the 2014 legal agreement customers who are overcharged for an item costing $5 or less are legally entitled to get that item for free and get a $10 gift card if they’re overcharged for items costing more than $5.

“This is a company whose marketing campaigns, as far as I can tell, is fundamentally based in negligence, and a lack of care as to whether or not they are defrauding Missouri consumers. We will continue to be vigilant until we see the problem fixed.”

Thirteen of the stores investigators found in violation are in the St. Louis area including locations on: 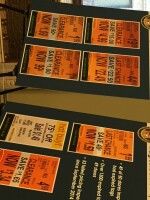