Missouri Attorney General Chris Koster is accusing Walgreens of engaging in false and deceptive pricing schemes, that he said amounts to stealing. In St. Louis Tuesday,Kosterannounced a lawsuit against the company.

Kosterhad investigators go to stores across the state, and said they found display tags were often inaccurate, and that membership rewards didn’t always deliver on the price reduction.

“Overall, more than 20 percent of the items we purchased rang up at the register at a higher price than the price displayed on the shelf," Koster said. "To be specific, we made 205 purchases and were overcharged 43 times.”

Koster said the store is “engaging in false and deceptive advertising and pricing schemes.”

“My concern is that this is not sloppiness, that this is a business practice to essentially steal from sick and old people who go into Walgreens and find themselves at the cash register, they have 6 people behind them, they can’t go back to the aisle, so they pay Walgreens’ toll time and again,” Koster said, adding that the overcharges on items ranged from a few cents to $15.

The Democrat said his investigators were overcharged at two St. Louis locations – one on Olive Blvd and one at Lusher Blvd.

Missouri joins California and Wisconsin as states with legal action against the company.

In response, Walgreens has issued the following statement:

"We have a 112-year history of acting in our customers' best interests, and that will continue to be our focus. While we won’t comment on the complaint itself, we were disappointed and disagree with the attorney general's comments. However, we are prepared to have a constructive dialogue about the issues he raised and address any appropriate concerns." 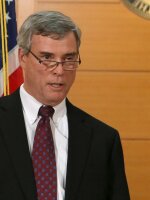