When The Wild Gets Crowded: Appalachian Trail's Celebrity Climbs

When Maine Gov. Percival Baxter donated the 200,000-acre Baxter State Park, he envisioned a place of solitude, a place that could be kept "forever wild." Here, traffic is limited. So is camping, and so are nearly all types of motorized recreation. Baxter State Park is also known for something else that makes it special: the final section of the Appalachian Trail.

For thru-hikers who make the arduous journey from Georgia to Maine, this is much more than a scenic pit stop. The Appalachian Trail takes them to the mile-high summit of Mount Katahdin, a granite fortress that towers above the tree line and is considered one of the most challenging hikes in New England. It's also Baxter State Park's crown jewel.

The popular trail is expected to see a surge in traffic with the recent release of A Walk in the Woods. The movie is based on Bill Bryson's best-selling memoir about two hikers' experiences. But increased pressure from hikers and raucous behavior is prompting park managers to consider putting the trail's end somewhere else.

"We went to Katahdin and it was beautiful," says Kacy Hale of Virginia, who ended her five-month trek in Baxter State Park recently with two of her friends. "We were so looking forward to being there."

Along the way, they endured constant hunger, hundreds of mosquito bites, drenching thunderstorms and an encounter with a black bear. It was a profound personal experience. And Hale says she's glad she didn't put it off until after the movie release of A Walk in the Woods.

"That's what all the thru-hikers are talking about," Hale says. "They're like, there's gonna be a lot of traffic on the trail next year. I'm really glad that we did it this year."

Ron Tipton, executive director of the Appalachian Trail Conservancy, says he can't predict how many more hikers will pursue the same goal, but after the book A Walk in the Woods was published in 1998, traffic on the trail increased 60 percent in just two years. The movie, he says, will bring even more attention.

"It brings the experience of the trail to a much broader audience, and I think that's good," he says. "I think the more relevant this trail is to more of the American population, the better."

Last year there were about 2,000 thru-hikers on the trail. That's up from 300 two decades ago. But with more people come more problems. Baxter State Park Director Jensen Bissell says some are violating wilderness park rules when they climb Mount Katahdin, hiking in large groups, for example, relieving themselves too close to the trail and not cleaning up, drinking and smoking pot at the summit, and generally whooping it up.

"You're really trying to give people the opportunity for solitude and expansive exploration of a wild landscape. It's a sacred mountain to the Native Americans of the state of Maine," Bissell says. "So, it seems reasonable when you reach this place you should have respect for the place itself and for the other people who are there."

Bissell says long distance hikers aren't the only ones at fault. Day hikers also climb Katahdin. But he says they're generally easier to manage. The tipping point came in July when ultra-marathoner Scott Jurek set a record for completing the entire Appalachian Trail in just 46 days. He then celebrated atop a windy Mount Katahdin with a group of friends and corporate sponsors. 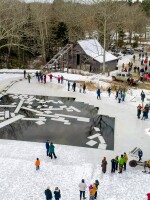