In Zimbabwe's Media, It's All About Robert Mugabe

When you turn on the morning news in Zimbabwe — or the afternoon news, or the evening news — there's a virtual guarantee you'll hear about President Robert Mugabe, or even his actual voice.

Even when there's a song by the Zimbabwean group Born Free Crew, it features a voice-over of none other than Mugabe, who's been leader since independence in 1980.

In the song, he talks about Zimbabwe's colonization by the British, and how his ZANU PF party led the country to freedom. The jingle airs constantly on the Zimbabwe Broadcasting Corporation, a station run by the Ministry of Information. In fact, it's the only television station in Zimbabwe.

"It's actually not journalism, it's propaganda. I mean, it's straightforward propaganda," says Andy Moyse, the director of the Media Monitoring Project of Zimbabwe, a private group based in Harare.

Under a 2009 agreement, Zimbabwe is now supposed to be opening the airwaves and implementing media changes. But that hasn't really happened.

The government did issue two new radio licenses last year to organizations with close ties to Mugage's ruling party, and a few nongovernment print publications have sprung up.

An Editor Is Prosecuted

Across town, printing presses churn out copies of NewsDay, Zimbabwe's largest independent newspaper. It's one of the few publications to have appeared since 2009.

NewsDay's editor, Constantine Chimakure, says they aim to be the country's most objective paper.

"We are not pro-government, we are not anti-government. We try to maintain a balance, to give real facts without spinning them," he says.

NewsDay's circulation numbers are not made public. Chimakure says that from a financial standpoint, things are going relatively well. But he acknowledges that advertising revenue is thin in Zimbabwe, and it's hard to get people to spend a dollar on a newspaper when so many are struggling to survive.

"With a dollar, you can buy two loaves of bread," he says.

Now, with elections on the horizon, Chimakure says the government has begun cracking down on journalists.

He was recently charged with undermining the authority of the president for publishing a story about Mugabe's health, and is awaiting trial. Many fellow journalists are facing similar charges, and Chimakure expects the situation to worsen.

It's actually not journalism, it's propaganda. I mean, it's straightforward propaganda.

"They will be assaulted, they will be harassed when they try to go and do their professional job in the rural areas," he says.

In Seke, a rural community 40 miles outside Harare, James Chidakwa and his father eat roasted nuts and cornmeal inside a small brick hut. They're farmers who rely heavily on maize and chickens to survive. James Chidakwa says that like many, his family refuses to listen to government TV or radio broadcasts.

"They always lie to the people," he says. "Everything they say is a lie."

So at 6 p.m. most evenings, they turn on a battery-powered, short-wave radio and tune in to a "pirate radio station." Chidakwa says Shortwave Radio Africa and Voice of America are their favorites.

"If you want to hear the truth, wait for the end of the day to listen to Shortwave Radio Africa, to listen to VOA," he says.

The stations, which are based in the U.K. and the U.S., send their signals through radio towers in countries that border Zimbabwe. That means Zimbabwean officials — who claim these broadcasts are illegal — have little recourse. In the past, they've confiscated short-wave radios. Chidakwa says that forces some people to listen undercover.

"Some of them, they will take the radios into their bedrooms and, low volume, they listen to the news. But the truth is, there is fear in them," he says.

But for Chidakwa and his father, it's a risk they are prepared to take.

The original radio and online versions of this story said that Zimbabwe's government had not issued any new broadcast licenses since planned changes were announced in 2009. The government did issue two new radio licenses last year to organizations with close ties to President Robert Mugabe's ruling party. 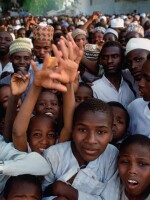