Gov. Eric Greitens, who has called for ethics reforms, faces a fine from the Missouri Ethics Commission for failing to report that his gubernatorial campaign received a donor list from a charity he founded.

The ethics commission document was signed this week by Greitens and attorney Michael G. Adams, who the Kansas City Starreported is also an attorney for both 501(c)(4) nonprofits tied to Greitens— neither of which have to disclose their donors—as well as general counsel for the Republican Governors’ Association, which donated millions toGreitens’gubernatorial campaign,Greitensfor Missouri.

Greitens has filed an amended campaign finance report for April 2015, valuing the donor list as $600 in-kind contribution from Daniel Laub, his campaign manager. Under federal law, such donor lists can be rented to all candidates’ campaigns for fair-market value, but cannot be given to a campaign.

The Ethics Commission imposed a $1,000 fee, most of which would be waived if Greitens pays $100 and commits no other violations in the next two years.

The AP first reported in October that Greitens' campaign accessed a donor list from the nonprofit , a group thathas raised millions of dollars to help veterans of the wars in Iraq and Afghanistan make the transition into civilian life. That list was used to raiseabout $2 million from people and entities.

State Democratic Party Chairman Stephen Webber said Saturday in a statement that Greitens "embodies everything ... about the culture of corruption in Jefferson City," and that his "problems with ethics just don't go away." 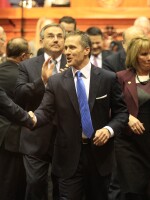 The Associated Press
See stories by The Associated Press
Hungry For MO returns!
KCUR's podcast Hungry For MO is back with more stories about Missouri’s iconic foods, from barbecue to pizza and beyond.
Subscribe now
Latest Stories
Support news that matters in Kansas City
KCUR serves the Kansas City region with breaking news and powerful storytelling.
Your donation helps make nonprofit journalism available for everyone.
Donate Now
Related Content