Updated at 3:25 p.m. Sept. 18 with release of Post-Dispatch reporter — More than 80 people were arrested Sunday night, St. Louis police said, long after the official — and peaceful — protests ended. The last group of people to be arrested downtown were boxed in by police and sprayed with a chemical agent, a livestream showed, and a St. Louis Post-Dispatch staffer tweeted that one of their reporters was among them. A Post-Dispatch editor this morning announced that reporter Mike Faulk has been released.

St. Louis Interim Police Chief Larry O’Toole provided the arrest number at a late-night news conference, where he also said people “would be prosecuted to the fullest extent of the law.”

“We’re in control. This is our city. And we’re going to protect it,” O’Toole said, adding later, "I'm proud to tell you the city of St. Louis is safe, and the police own the night."

Mayor Lyda Krewson also spoke: "We have work to do in the city. We need more and better opportunities, but destruction cannot be tolerated."

Each night since a judge found Friday that former St. Louis officer Jason Stockley, who is white, not guilty of first-degree murder in the 2011 fatal shooting of Anthony Lamar Smith, who was black, protesters have walked the city’s streets to decry what they see as a flawed criminal justice system.

Until Sunday, only 43 people had been arrested even after two nights of small groups sticking around and shattering business’ windows in the Central West End and the Delmar Loop, as well as breaking windows at the mayor’s house.

Prosecutors alleged Stockley executed Smith after a car chase and then planted a gun in his car. Stockley maintained that Smith reached for the gun and that he shot Smith in self-defense.

The St. Louis Post-Dispatch  reported Sunday that the U.S. Department of Justice decided last year that there wasn’t enough evidence to prosecute Stockley for a civil rights violation in Smith’s death. Stockley left the St. Louis police in 2013.

Updated at 11:30 p.m. with more arrests —A small group of protesters who reconvened late Sunday night were surrounded by police, sprayed with a chemical agent and arrested in downtown St. Louis. It happened a couple of hours after windows at several downtown businesses were smashed.

The majority of the protests since Friday have been peaceful and without incident. Arrests generally have happened later in the evening, when the official organized marches are over.

The St. Louis Metropolitan Police Department didn't immediately release the number of how many were arrested Sunday; 43 had been arrested since Friday.

Updated at 9:05 p.m. with arrests — Police used tear gas and pepper spray to try and diffuse the remaining protesters in downtown St. Louis on Sunday night.

Multiple people were arrested after windows of businesses were broken, and large contingent of officers was trying to control the situation. One bicycle officer had a leg injury and was taken to the hospital, the St. Louis Metropolitan Police Department tweeted.

The unrest followed hours of peaceful protests Sunday. Demonstrators have taken to the streets since Friday morning, when a judge decided that former St. Louis officer Jason Stockley was not guilty of first-degree murder in the 2011 fatal shooting of Anthony Lamar Smith. Smith was black, Stockley is white.

Updated at 8:45 p.m. with windows being broken — After hours of peaceful protests, things began to heat up after the sun went down Sunday.Windows of businesses at Olive and 9th streets in downtown St. Louis were broken at about 8:30 p.m., and the few protesters who stayed after the official marched were shouting. People then began to run, and officers used pepper spray.

Updated at 7:35 p.m. with more from protesters — Sunday’s protest did a loop from St. Louis Metropolitan Police Department’s headquarters west to the campus of Saint Louis University and back.

KylerMulhauserand his wife brought their 4-year-old daughter and 1-year-old son to the march.“We want our kids to grow up in a world that’s a little bit different than ours is now,” the 35-year-old said. “This is a really small way of stepping in that direction.”

He also was encouraged by how many people were out on Sunday: “It tells me that other people are willing to step out of what’s safe and comfortable and engage with the suffering of other people around them.”

Maurnice Baker, 44, said things would be different if the tables were turned when it comes to the Jason Stockley trial. Stockley, who fatally shot Anthony Lamar Smith in 2011, is white; Smith was black.

“If it was a white boy, and someone had said ‘I’m going to kill this (expletive),’ then they would have had everybody and their momma out here marching,” she said. “And if a black cop had shot a white boy, he would be under the jail.”

Updated at 6:10 p.m. with quotes from protester and details of march — As the protesters marched near the Saint Louis University campus in midtown on Sunday evening, retired St. Louis police officer Robert T. Jordan said that he'd looked at the evidence in the Jason Stockley trial.“He should have been found guilty,” said the 53-year-old black man, who worked in the homicide department. “But in my heart, I knew he would walk out the front door because of the way the system is.”

Near Chaifetz Arena, some SLU students watched the procession from dorms. Protesters chanted at them: “Out of the dorms, into the streets.”

A few people approached a line of Missouri Highway Patrol troopers who were blocking a ramp to Interstate 64 on Grand Avenue. Fellow protesters encouraged them to keep marching because there were children in the crowd and it wasn’t the right time to take on the police.

Original story from Sept. 17: With frustration and anger still roiling over the acquittal of former St. Louis police officer Jason Stockley, protesters returned to the streets Sunday to make themselves heard.

About 300 people gathered outside the St. Louis Metropolitan Police Department’s headquarters Sunday afternoon. Activist and Democratic candidate for U.S. representative Cori Bush led the chants and walked with Anthony Lamar Smith’s mother, Annie, and her husband, during a six-minute period when protesters were asked to be silent.

HeatherTisdale, who is white, said she thought she knew what racism looked like in the U.S."I knew there were things out there that were kept under wraps and are denied by a lot of people who have the luxury of not understanding it,” the 46-year-old said. “But having a biracial black child exposed me to a whole level of racism as a white woman, it was easy for me to deny existed.”

From there, instead of going to Kiener Plaza as advertised, the crowd made their way down Olive Street and to Saint Louis University’s campus.

Stockley, who is white, was found not guilty of first-degree murder Friday after an August bench trial in the 2011 shooting of Anthony Lamar Smith, who was black. Prosecutors alleged Stockley executed Smith after a car chase and then planted a gun in his car. Stockley maintained that Smith reached for the gun and that he shot Smith in self-defense.

The St. Louis Post-Dispatch  reported Sunday that the U.S. Department of Justice decided last year that there wasn’t enough evidence to prosecute Stockley for a civil rights violation in Smith’s death.

Eli Chen
Eli Chen is the science and environment reporter at St. Louis Public Radio. She comes to St. Louis after covering the eroding Delaware coast, bat-friendly wind turbine technology, mouse love songs and various science stories for Delaware Public Media/WDDE-FM. Before that, she corralled robots and citizen scientists for the World Science Festival in New York City and spent a brief stint booking guests for Science Friday’s live events in 2013. Eli grew up in the northwest suburbs of Chicago, where a mixture of teen angst, a love for Ray Bradbury novels and the growing awareness about climate change propelled her to become the science storyteller she is today. When not working, Eli enjoys a solid bike ride, collects classic disco, watches standup comedy and is often found cuddling other people’s dogs. She has a bachelor’s in environmental sustainability and creative writing at the University of Illinois Urbana-Champaign and has a master’s degree in journalism, with a focus on science reporting, from the City University of New York Graduate School of Journalism.
See stories by Eli Chen

Ryan Delaney
Ryan is a reporter on the education desk at St. Louis Public Radio, covering both higher education and the many school districts in the St. Louis region. He has previously reported for public radio stations WFYI in Indianapolis and WRVO in upstate New York. He began his journalism career working part time for WAER while attending Syracuse University. He's won multiple reporting awards and his work, which has aired on NPR, The Takeaway and WGBH's Innovation Hub. Having grown up in Burlington, Vt., he often spends time being in the woods hiking, camping, and skiing.

Willis Ryder Arnold
Willis Ryder Arnold is an arts and culture reporter for St. Louis Public Radio. He has contributed to NPR affiliates, community stations, and nationally distributed radio programs, as well as Aljazeera America, The New York Times blogs, La Journal de la Photographie, and LIT Magazine. He is a graduate of the CUNY Graduate School of Journalism and a recipient of the Society of Professional Journalist’s award for Radio In-Depth Reporting.
See stories by Willis Ryder Arnold 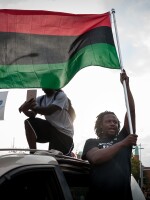 Brit Hanson
Brit Hanson oversees special newsroom projects while also tending to the digital aspects of daily reporting and production. She comes to St. Louis Public Radio from northern New York, where she was North Country Public Radio's first-ever digital reporter and producer. Brit is a graduate of the Salt Institute for Documentary Studies.
See stories by Brit Hanson