No history class today in West Virginia. Today is the fourth straight school day when class in West Virginia is out. Teachers and other school employees are on strike. They're calling for higher pay and better benefits, and they oppose bills that they say will hurt West Virginia's ability to hire quality teachers. Thousands of people packed the State Capitol Building yesterday, and Dave Mistich of West Virginia Public Broadcasting followed along.

DAVE MISTICH, BYLINE: Hours before a formal announcement by union leaders about the continuation of the work stoppage, those who rallied lawmakers already had their minds made up about what their next move would be.

MISTICH: As thunderous chants and claps echoed off the marble walls of the Capitol, Governor Jim Justice was traveling around the state to visit high schools in Wheeling, Martinsburg and Morgantown for a series of town halls. While public education couldn't be ignored, the governor made the issue secondary in Wheeling by focusing on health care fixes through the anticipated boom of the natural gas industry around the state, and it's that he wants to focus a special legislative session on.

JIM JUSTICE: Absolutely make us go to a special session on gas, on gas.

JUSTICE: Now, just listen. Make us go to a special session on gas, and then in turn give me the opportunity...

MISTICH: Back in the Capitol, West Virginia Education Association President Dale Lee outlined the demands of his union and others involved in the walkouts.

DALE LEE: It's not one single issue. It's four. And we've made that clear it's not only our health insurance. It's the pay, but it's also the respect and taking away the seniority, and those things have to go.

MISTICH: Although the finance board for the public employees insurance program has frozen once proposed changes that would have increased costs to both the state and employees, and with a salary increase signed into law by Justice providing a 4 percent raise over three years, Rachel Campbell (ph) of Charleston says it's still not enough.

RACHEL CAMPBELL: Being a teacher is a giant sacrifice for your family. It's a financial burden, and many of us have to take second or third jobs to support our families.

MISTICH: As for parents across the state dealing with their kids out of school, many towns are making use of community centers or churches to occupy children and make sure they're fed. Back in Wheeling, Kate Marshall (ph) has been using the time with her kids to give back to the teachers.

KATE MARSHALL: So we spent time writing letters, coming up with things we wanted to tell them about how we appreciated them. And then we drove to different demonstration sites and dropped off coffee and donuts and visited with the teachers. And so it's actually become a really big opportunity for us.

MISTICH: Attorney General Patrick Morrisey has offered legal support to the Board of Education to get teachers back to the classroom. But the superintendent of schools decided not to add the item to the board's Tuesday agenda, yet again leaving in question when the work stoppage might end. For NPR News, I'm Dave Mistich in Charleston, W. Va. Transcript provided by NPR, Copyright NPR. 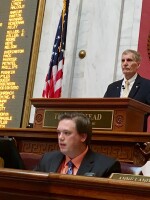 Dave Mistich
Dave Mistichis the Charleston Reporter for West Virginia Public Broadcasting. A native of Washington, West Virginia, Dave can be heard throughout week on West Virginia Public Radio, including during West Virginia Morning and Inside Appalachia. He also anchors local newscasts during Weekend Edition on Saturday mornings and covers the House of Delegates for The Legislature Today.
See stories by Dave Mistich
Latest Stories
Support news that matters in Kansas City
KCUR serves the Kansas City region with breaking news and powerful storytelling.
Your donation helps make non-profit journalism available for everyone.
Donate Now