Trade War With China Heats Up

The U.S. has issued another blow in the trade war with China. The White House now says it will assess tariffs on $200 billion more in Chinese goods. That is on top of the more than $30 billion in goods taxed last week. The Office of the U.S. Trade Representative has prepared a list of goods that includes everyday products from refrigerators to handbags. Joining us from Shanghai now is NPR's Rob Schmitz for more on this.

MARTIN: So Beijing issued a statement in response to these tariffs, saying it is, quote, "shocked" by the new tariffs. But can they really be shocked at this point?

SCHMITZ: Yeah, I think it's hard to be shocked by this when President Trump had already promised to slap tariffs on $400 billion worth of Chinese products if China retaliated to the administration's first round of tariffs last week. But, you know, it's possible that Beijing was taking this threat with a grain of salt, knowing that President Trump is capable sometimes of exaggerating these types of things. And now that the president seems to be serious about at least part of the threat, Beijing is likely starting to see that, and they're not very happy about this.

MARTIN: So I mentioned refrigerators and handbags. What other kinds of products will these new tariffs target?

SCHMITZ: It's a pretty big list, Rachel, and it goes beyond the tightly focused targets from the first round of tariffs, which targeted Chinese industrial machinery and tech equipment. This round of tariffs, if they go through, will target Chinese products that American consumers buy at big-box retailers like Walmart. These include frozen pork, fish, fruits, vegetables, and then we go on to leather, handbags, baseball gloves, all types of clothing. There are more than 6,000 types of Chinese products on this list, and the U.S. is proposing to slap 10 percent tariffs on all of them. And with hearings on these new tariffs scheduled for late August, they could be imposed as early as September.

MARTIN: Which means consumers are going to see higher prices when they try to buy this stuff.

SCHMITZ: That's absolutely right, yeah. I mean, I think eventually, that is the result here.

MARTIN: So China sends a lot more exports to the U.S. than the U.S. sends the other way. So it's not - it can't respond in kind to these new tariffs. But it does have other ways of retaliating, right?

SCHMITZ: It does. You know, we saw a hint of how China's thinking about this in its response today. In a written statement, Beijing called on other countries to join China in fighting these trade measures. And as we know, Trump's trade measures on Canada, the EU, Japan and other countries have already angered those countries. China knows this, of course, so Beijing is calling on them to unite and fight back against the U.S. And should that happen, that would sort of be the opposite result of what the Trump administration seemed to be hoping for when it began targeting Beijing's business practices in the first place.

MARTIN: Is there any sign that either country is going to back down? I mean, there aren't any talks between the two countries scheduled yet.

SCHMITZ: Right. And it doesn't seem like neither - you know, neither side has shown any sign of backing down. Beijing has consistently said that China is not afraid of a trade war and that if the U.S. wants to fight, China would fight to the end, it says. At the same time, throughout this dispute, Chinese officials have said that if the U.S. is open to negotiate, China's door is wide open. The interesting thing here is that the U.S. has said the same thing and that it, too, would be willing to negotiate. But the fact is that neither side seems to want to make the first move. 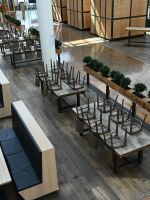