Kansas City, MO – At StoryCorps recording booths across the country, friends and loved ones interview each other about their lives. Each Tuesday during Morning Edition, we'll bring you a story from the MobileBooth in Kansas City.

In 1990, H & R Block co-founder, Henry Bloch was denied membership to the Kansas City Country Club for being Jewish. In protest, world class golfer, Tom Watson resigned. Henry Bloch tells his son, Thomas what happened, and how it changed the club's membership policies to this day.

StoryCorps MobileBooth was stationed at 63rd Street and Brookside Boulevard, September 9, 2010 to October 2, 2010. StoryCorps in Kansas City is sponsored by Mid-Continent Public Library. 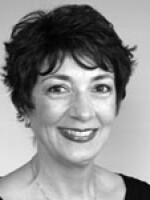 Linda Sher
Linda grew up in Prairie Village and was drawn to a career in radio, after her dreams of becoming the next American Idol were dashed. While completing her Master's Degree in Communication Studies at the University of Missouri-Kansas City, Linda's first big break in journalism was the Afternoon Drive Announcer position at KCUR. She was the Nurse Practitioner for UMKC, and has also worked as a professional actor in musical theater. One of her news stories for Up To Date was picked up by the Chicago Tribune. Linda loves dogs, hiking, coloring, movies, and going to the Kansas City Symphony. And...some say her home-made baked goods are mighty tasty!
See stories by Linda Sher
Latest Stories
Support news that matters in Kansas City
KCUR serves the Kansas City region with breaking news and powerful storytelling.
Your donation helps make non-profit journalism available for everyone.
Donate Now