KCUR | By Maria I. Martinez

Maria Martinez is a graduate of Emporia State University in Kansas. She spent last semester student teaching in a kindergarten classroom in the Kansas City, Kansas, Public Schools.

With support from the Walton Family Foundation, KCUR has asked student teachers in the Kansas City area to write about their experiences learning how to teach during a pandemic. We'll be running their stories as a series of teacher diaries in the coming weeks.

There are times when I express myself using one language then switch to the other language within one conversation or even one sentence. This blend of the two languages in conversation — commonly known as “Spanglish” — created my identity as a Latina in the United States.

Growing up bilingual provided me with an experience of belonging in two worlds while also loving both. There were words that held more power, weight, love, tradition and emotion in Spanish that could not be expressed otherwise and that were meaningful to me.

Speaking Spanish was also something that held a different kind of weight — a heavy one. It meant that my grasp of English would be held in question and tested for years after my proficiency was proven. Speaking Spanish in public also came with the fear of being told not to use the language and the false claim that it is not allowed in the U.S. My grasp of the Spanish language regressed as I chased English proficiency. It was used at home and with family.

Once I reached high school there was something of a cultural shift. A new wave of pride in being bilingual and speaking Spanish emerged as the Latinx community came together under the similar struggles of acceptance. I began speaking Spanish outside of the home, falling in love with my native language again. In college, I took coursework for intermediate Spanish grammar to bridge the gap between my literacy and my conversational ability.

There was also a great deal of pride in the ability to use the language at work. For me, the ability to help others with language barriers they would face when communicating gives me a sense of accomplishment wherever I am working.

When students are coming into school, not all speak English as their native language. In Kansas City, Kansas, where I student taught, 44% of students have a different native language. This is a quickly growing demographic: 20% of public school students in the United States are English learners (ELs) now, and 25% of students will be by 2025.

Should these students be “school ready” in a certain language? I believe that students coming in with native language literacy skills — like speaking, listening and being read to in the language their family speaks — will help them learn English. Having skills in any language is still literacy, even if it is not English. Having native language literacy also means that the student can transfer these skills when learning English.

More resources for students learning English should be available. That starts with having teachers who are trained in Teaching English to Speakers of Other Languages, or TESOL, and giving schools the tools they need to support their English learners. These supports can include professional development, culturally relevant materials for teachers to use within the classroom and family resources for continued learning at home. The emphasis should be for schools to welcome their EL families and for families to feel as though they are recognized and valued within the classroom.

As I move on to teach 5th grade in Topeka Public Schools at Scott Dual Language Magnet School, which participates in an award-winning Spanish immersion program, I will be teaching in a bilingual classroom. Spanish will be a part of everything I do as a teacher. 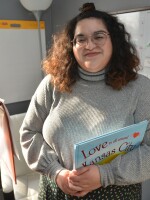 Maria I. Martinez
Maria Martinez is a senior at Emporia State University in Kansas. She is currently a student teacher in a kindergarten classroom in the Kansas City, Kansas, Public Schools. She is one of two Walton education fellows sharing her experiences in the classroom this semester.
See stories by Maria I. Martinez
Latest Stories
Hey, thanks for reading.
KCUR serves the Kansas City region with essential news and information.
Your donation today keeps local journalism strong.
Donate Now
Related Content