Eighty percent of Americans live in urban areas. Yet when it comes to tracking health, most data is collected at the county, not the city level. That means city leaders looking to improve residents’ health lack a baseline of information to work from.

City-level health data can be critical when it comes to measures like restricting smoking, incentivizing grocery chains to move to particular neighborhoods and deciding where to build new parks and health clinics. A new project aims to create a data dashboard that almost any city can use to get a handle on the health of its citizens.

The Municipal Health Data for American Cities Initiative is a collaboration between New York University and the National Resource Network, a White House and HUD-funded agency that assists cities facing economic hardship.

In its pilot phase, the initiative will focus on four cities: Kansas City, Kansas; Flint, Michigan; Providence, Rhode Island; and Waco, Texas. The plan is for the project to base its data collection around concerns expressed by city leaders, including alcohol and drug addiction, lack of access to healthy food, chronic disease, lead exposure, and more.

Side Effects reporter Andrea Muraskin spoke with one of the lead researchers on the project, Marc Gourevitch, M.D., chair of the Department of Population Health at NYU Langone Medical Center, to learn about what the initiative hopes to accomplish.

What will be the end product of the project?

We're at the very early part of this project.  We're going to select some number, perhaps it will be around 20 metrics that cover diverse aspects of health: individual behavior, neighborhood characteristics, perhaps some environmental characteristics, perhaps some others.  And those 20 measures will be the same measures across all of the cities. So city leaders will be able to see how they're doing and also compare.

So you'd be looking at some health data like rates of diabetes, rates of obesity, but then you'd also be looking at infrastructure like walkability, transportation, park access?

Absolutely. You've got it. We're very concerned also with measures of health equity, and incorporating that as well.

Why aren’t measures for health available at the city level already?

Historically, often the jurisdiction for health was placed at the county level. As a result, you can go onto the web and figure out what are the smoking or obesity rates by county, but you cannot do that by city in the US. But in fact what's happened is that cities have developed the expectation of helping advance and support the health of their populations to some extent.

Why you think county-level data is not enough? If we're already spending money to collect county data, why should we pour additional money into city data?

Picture a large county anywhere in the country and just visualize it in your mind. Let's say in the northeast part of that county is a city of 125,000 people. And by the time you get to the southwestern part of the county you've driven through 4-5 miles of rural countryside. So the mayor in the city in the northeast of the county is working with statistics that look at the whole county. If they're interested in promoting physical activity, it may be that people outside the city are very active, but inside the city, because of the way that the city's designed, and other factors, the physical activity rates are actually sub-par. And if you average the whole thing out you actually get normal activity rates. And so it's not useful for that mayor. It doesn't mirror the experience of the people in the city because it's diluted by what's going on in the rest of the county.

How could having city-level data lead to a positive outcome for citizens’ health?

You can think of smoking for example. Questions like whether to allow smoking in restaurants, or how to address purchase of cigarettes at what age, or how to put up signage or address when people smoke outdoors, or whether some kinds of housing should be smoke-free. All those things can be addressed at the city level, through city policies. By having what everyone in that city agrees is a real baseline, that can spur action in the first place; and in the second place, it gives you a target to work against.

Did the lead crisis that's going on now influence the selection of Flint?

Not per se. I think there's clear attention to the strong needs of Flint on the health side, but it is one of the cities that already had a close working relationship with the National Resource Network. And in their application they expressed an interest in the health of their population across the board, including other core health conditions, in a fairly holistic way.

I understand there’s going to be a website available in September.

That is our target. But the dashboard in September will only have data in it for four cities.

This is a pilot project. The goal is to make this work and work out any challenges that are involved in getting the data, analyzing it to the city level, [figuring out] what's the most effective way to structure a website so it's of most use to our city partners, all of that kind of stuff.

Can we do this for four cities? If the answer is yes and it's useful, and the city leadership says, Wow this is great, and communities are saying this is helpful to have this in these four cities, then the hope would be to move on to phase two. The goal is for it to apply to every city in the country, of a certain population and above, four or five hundred cities ultimately.

Side Effects Public Media is a health journalism collaborative exploring the impacts of place, policy and economics on Americans' health. 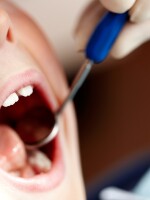 Andrea Muraskin
Andrea Muraskin manages the social media and website for Sound Medicine News, and contributes web and radio reporting. Prior to joining the Sound Medicine News team, she was a freelance reporter and producer, notably creating the radio feature series’ The Neighborhood Project, The Life Stories Project, and Constitution Indiana at 90.1 WFYI. Andrea was a radio coach for the Indianapolis-based youth media organization Y-Press, where she had the privilege of working with some of the world’s best teen journalists.
See stories by Andrea Muraskin
Latest Stories
Support news that matters in Kansas City
KCUR serves the Kansas City region with breaking news and powerful storytelling.
Your donation helps make non-profit journalism available for everyone.
Donate Now