Faculty, staff and students at Donnelly College, a small, private Catholic college in Kansas City, Kansas, are celebrating their ranking this week by U.S. News and World Report as the most ethnically diverse college in the Midwest.

"We have known for quite a while that we are among the most diverse colleges, but we didn’t know we were the most diverse," exclaims Donnelly's president, Monsignor Stuart Swetland.

Swetland says the ranking affirms Donnelly's commitment "to be very inclusive of everyone in our community who wishes to pursue higher education."

As a commuter college, Donnelly's students come from as far away as Topeka and St. Joseph, Missouri, he says, as well as from Kansas City, Missouri, and Johnson County, Kansas. But Wyandotte County is its home.

"Wyandotte County has no single majority race," Swetland points out.

More than 80 percent of those students, he says, are the first in their families to go to school.

"We reflect the diversity of Kansas City, we reflect the need there is in Kansas City to provide education for everyone, as our economy needs that higher education," Swetland says. "It’s no longer satisfactory to have only a high school diploma. It needs to be more than that."

Given the current political climate of increased racial tensions and anti-immigrant rhetoric, Swetland acknowledges it is "a disconcerting time” for people of color within Donnelly’s student body.

But he says the campus is free of those tensions.

"We just had convocation, our opening mass and matriculation ceremony, and there was such a great spirit of community,” Swetland says “We know we have to deal with them in the greater economy and environment of our country, but here everyone is in this together.”

While Kansas is 86 percent white, according to the United States Census Bureau, Swetland suggested it is not surprising to see three Kansas colleges with religious affiliations topping an ethnic diversity list.

He says such schools have often located their campuses and set tuition rates to attract a diverse student body.

"For Donnelly that’s our mission: to serve those who might not otherwise be served, giving them an affordable, accessible quality higher education that allows them to go on to whatever it is God’s calling them to do."

C.J. Janovy is an arts reporter for KCUR 89.3. You can find her on Twitter, @cjjanovy. 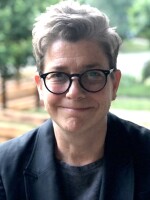 C.J. Janovy
C.J. Janovy is the director of content-journalism for KCUR 89.3. You can email her at cj@kcur.org.
See stories by C.J. Janovy
Latest Stories
Hey, thanks for reading.
KCUR serves the Kansas City region with essential news and information.
Your donation today keeps local journalism strong.
Donate Now
Related Content