Parson took the opportunity to flesh out his main priorities of bolstering workforce-development programs and improving roads and bridges. He told lawmakers that he wants to reorient economic-development programs to train people for local jobs — and fight opioid abuse and boost money for drug courts.

“I stand before you today to share a vision,” Parson said. “A vision that will chart Missouri’s future into the next decade. Missouri is dear to my heart, and by working together, we can protect and build a Missouri that is successful for the next generation.”

The centerpiece of Parson’s speech was his advocacy for expanding some workforce-development efforts, including $22 million to help train people at community colleges, technical schools, and colleges and universities.

In his roughly $30 billion budget, Parson is calling for the full funding of the K-through-12 foundation formula. He’s also calling for about $116 million of general revenue to be left in the bank to plan for unforeseen expenses.

“Our budget also proposes a reduction of nearly 430 government positions all while maintaining our conservative approach to managing and streamlining government services,” Parson said. “In fact, our administration recently completed the state’s largest deregulation effort, eliminating nearly one out of every five state regulations.”

The job reductions will come through attrition and retirement without any layoffs, Parson said. 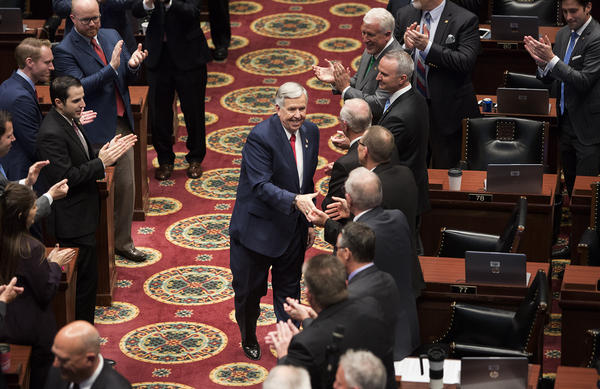 After the failure of a gas-tax hike last year, Parson is calling for the Legislature to authorize $351 million in bonding to repair 250 bridges throughout the state. He said that will free up other money to deal with the state’s other road projects.

“Over the years, we have seen proposals go before the voters and fail, but this cannot — and does not mean we are expected to do nothing,” Parson said.

That was a reference to how Missouri voters rejected a gas-tax hike in 2018 and a sales-tax increase in 2014. Under Parson’s plan, roughly $30 million in general revenue will go to pay off the bonds for the next 15 years.

“Also, we will be adding a $50 million cost-sharing program to assist our cities and counties to help address the most serious infrastructure needs in our local areas,” Parson said. “In fact, this raises the challenge for each of us to find even more creative ways to locate savings to make more substantial investments in our infrastructure without a tax increase to the people of Missouri.” 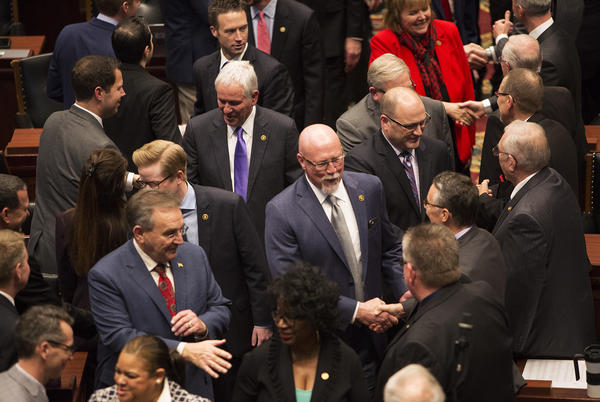 In addition to bolstering money for drug courts and prisoner re-entry programs, Parson is planning on closing Crossroads Correctional Center near Cameron and moving inmates and staff to other prisons across the state.

Parson said this move will allow Department of Corrections employees to get raises. He’s also calling for other state employees to get three-percent raises. And the governor wants to keep about $116 million in general revenue unspent — which he says will help if there’s an unforeseen expense.

“This decision is largely driven by our dedication to find efficiencies wherever we can in state government — and this can be done while ensuring safety, improving security and delivering a much needed pay raise. All being done with no layoffs.”

There were a few agenda items that Parson spoke about before the State of the State that didn’t make his speech: That included his desire for more state money to go toward early childhood education. He also didn’t say anything about taxing out-of-state online retailers and legalizing sports gambling. State Budget Director Dan Haug said Parson’s budget did not include money from either of those revenue streams.

Parson did allude to several ideas that may attract opposition from Democrats, including restricting abortion rights and lawsuits.

“There of course will be other issues that are important, like passing tax-credit reform, working to make government more efficient and more accountable, protecting freedoms and promoting a culture of life, and passing regulatory and venue reform, all of which must be done,” Parson said.

For the most part, Republicans, who control the General Assembly, were pleased by what they heard in Parson’s speech.

Senate President Pro Tem Dave Schatz, R-Sullivan, has been working on transportation-related issues since he was elected to the Legislature in 2011. He said he saw the governor’s bridge plan as effectively one-time money — and added that lawmakers will eventually have to think long-term.

“If we thought we were going to fund roads and bridges in this fashion in the future, I would probably reject that notion,” Schatz said. “So taking resources and putting them into bridges that are going to be around for 50, 75 or 100 years — that’s an investment you know is going to be there for a long time.”

At least one Democrat from the Kansas City area, Rep. Brandon Ellington, said he was pleased about the idea of closing the Crossroads Correctional Facility.

“I’m extremely elated that the governor is actually paying attention to it,” Ellington said. “Since I’ve been here, we’ve had Democrat and Republican governors that saw little to no concern about it. And I’m actually, again, elated, that we have a governor that’s making it his top priority right now.” 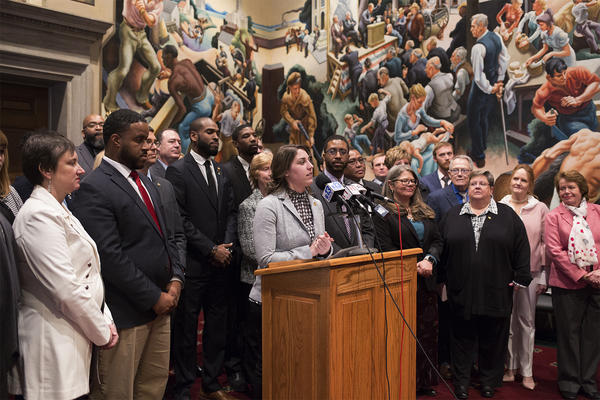 Another policy push that Parson didn’t talk about was changing or undoing a slew of initiatives voters approved in 2018. That includes increasing the minimum wage, repealing right to work and substantially changing how state legislative districts are drawn.

Senate Minority Leader Gina Walsh, D-Bellefontaine Neighbors, used the Democratic response to emphasize that her party will not stand for Republicans going against “the will of the people.”

“These issues are settled, Walsh said. “And any attempt to weaken or repeal the will of the voters must not pass.”

Both Walsh and House Minority Leader Crystal Quade of Springfield emphasized that they were glad Parson had replaced former Gov. Eric Greitens, who resigned amid a torrent of scandal. But Quade said, “while much has changed since a year ago, much remains the same.”

“Gov. Parson certainly brings to the office integrity and competency that his predecessor lacked,” Quade said. “And as House Democrats, we sincerely want him to succeed in improving our state and the lives of all Missourians. We’re ready to work with him to do just that. But being a better person and a better governor than Eric Greitens is frankly not a noteworthy accomplishment.”

State Rep. Kip Kendrick, D-Columbia, said that while this budget year may turn out OK because of a large amount of money left over from the previous year, he added he’s worried about how tax cuts that passed over the past few years will impact the ability to fund more services.

“Everybody’s saying, ‘At least we’re not Illinois,'” said Kendrick, alluding to that state’s financial woes. “Illinois doesn’t necessarily have a revenue problem; They have a budgeting problem. They don’t know when to say no. They’re not disciplined. We in Missouri are disciplined.

“We have a revenue problem in this state,” he added. “And it’s very real. And budgeting is going to become that much more difficult.”

Still, Parson stressed near the end of the speech that he’s willing to take some risks — especially since his only future political aspiration is running for a full term in 2020.

“I am willing to make the tough decisions that will put our state in a better position. If we truly care about the next generation,” Parson said. “I am absolutely confident that by focusing on the major issues of workforce development and infrastructure, together we will have a successful legislative session. Because, these are the issues that will benefit all Missourians.”