Most Of Congress In The Dark On 'Fiscal Cliff' Talks

Of the 535 members of Congress, not many appear to be in the loop about the "fiscal cliff" negotiations. That makes the rest nervous about having to vote on a bill on short notice despite misgivings about what's in it. But this is often how major deals get accomplished in Washington.

In these budget negotiations, the names Boehner and Obama come up most often — and virtually all the rest are on the outside looking in.

House Speaker John Boehner said Wednesday that there are still "serious differences" between him and President Obama when it comes to reaching an agreement to avoid the automatic spending cuts and tax increases in the new year.

After a House Republican conference meeting where Boehner spoke to his troops, reporters asked North Carolina Rep. Walter Jones about the status of the talks. He had to answer that he didn't know.

"You get more information many times than most of us in the conference," Jones told the reporters. "And I understand that. It's not a criticism. But there's just not much to tell us."

He said Boehner is "trying our best to negotiate but to keep with the principles of the conference."

Those principles include a strong opposition to raising taxes, especially tax rates, and an equally strong desire to cut spending.

California Republican John Campbell, a member of the House Budget Committee, doesn't have a seat at the negotiating table.

"You always worry when someone else is negotiating for something that I am going to be voting on, and sure I'm worried that it may be a deal I may not want to or feel comfortable supporting. But I don't know that yet. I don't think there's any indication of that at this point," Campbell says.

It's not just rank-and-file representatives who are left out. House Minority Leader Nancy Pelosi, the top Democrat in the House, says the president is the Democrat's lead negotiator.

"He knows our views," she says. "We trust his judgment. We all share the same values, and, again, we trust his leadership on this."

Pelosi recently penned an editorial arguing against raising the Medicare eligibility age. And earlier this week, a group of Democrats held a news conference to say it would be a mistake to cut Medicaid — at least in part to remind their negotiator-in-chief of their views.

Illinois Sen. Dick Durbin, the second highest-ranking member of the Democratic leadership team, says the fiscal cliff talks are really all about two men, and he's at peace with that.

"Because I stand behind the president and what he's asking for, I feel comfortable with it. I've also seen the effectiveness and the perfidy of committees, so having two people who can make a decision engaged makes sense," Durbin says.

Rarely have so many powerful people been so marginalized, and yet most seem to believe this is the only way.

Minarik was involved in the 1986 tax overhaul. There were many more people at the table back then, but he says the process took years, and the deadline this time is just weeks away.

"We have to work so quickly that we need to get down to a very small number of people to make the decision. And that's why we have just the president and just the speaker at the table," Minarik says.

But in the end, whatever they agree to has to get 218 votes in the House and most likely 60 votes in the Senate. And that's when all those members of Congress will be powerful again. 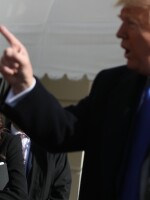 Tamara Keith
Tamara Keith has been a White House correspondent for NPR since 2014 and co-hosts the NPR Politics Podcast, the top political news podcast in America. Keith has chronicled the Trump administration from day one, putting this unorthodox presidency in context for NPR listeners, from early morning tweets to executive orders and investigations. She covered the final two years of the Obama presidency, and during the 2016 presidential campaign she was assigned to cover Hillary Clinton. In 2018, Keith was elected to serve on the board of the White House Correspondents' Association.
See stories by Tamara Keith
Latest Stories
Hey, thanks for reading.
KCUR serves the Kansas City region with essential news and information.
Your donation today keeps local journalism strong.
Donate Now