OK, now let's talk about what motivates you to bring reusable bags when you go to the grocery store. Maybe it's believing you're helping the environment. In some places, maybe it's saving money. Back in January, Dallas joined a number of cities that charge for plastic bags. But that experiment just got sacked. Here's NPR's Dianna Douglas.

DIANNA DOUGLAS, BYLINE: When Dallas adopted a five-cent fee per plastic bag, the governor-elect Greg Abbott mourned that it was the end of the Texas free-market model.

GOV GREG ABBOTT: Texas is being California-ized, and you may not even be noticing it.

DOUGLAS: Plastic bag manufacturers noticed it. They sued the city of Dallas, saying Texas state law prohibits taxes on containers. Rather than fight, the city council quickly repealed the bag fee. A dozen other towns in Texas still restrict plastic bags. But Dallas was always a tough sell. Less than half of residents supported the fee, according to a Dallas Morning News poll. But environmental groups said it had been making a difference. Zac Trahan is at the Texas Campaign for the Environment.

ZAC TRAHAN: People in neighborhood organizations that actually go out and do litter cleanups saw a huge decrease, just in the number of plastic bags they would find.

DOUGLAS: In the five months that the fee was in effect, Dallas raised over half a million dollars for environmental programs from the sale of more than 12 million plastic bags. Trahan estimates that retailers would've sold 90 million bags over the same period without the fee. Dianna Douglas, NPR News. Transcript provided by NPR, Copyright NPR. 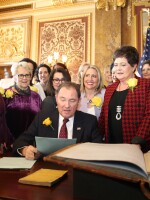 Dianna Douglas
Dianna Douglas has produced NPR's signature news pieces from across the nation and around the world. In the spring of 2010 she spent five weeks embedded with the US Army in Kandahar. Her work with the Special Forces in Meiwan Province, the Military Police in Kandahar City, and the recently-arrived 101st Airborne Division in Zhari document the small victories and overwhelming challenges of the American mission in Afghanistan.
See stories by Dianna Douglas
Latest Stories
Support news that matters in Kansas City
KCUR serves the Kansas City region with breaking news and powerful storytelling.
Your donation helps make non-profit journalism available for everyone.
Donate Now